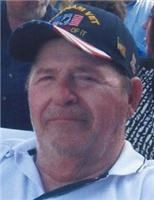 FUNERAL HOME
Chauvin Funeral Home - Houma
5899 Hwy 311
Houma, LA
Raymond "Pete" John Pitre, 68, a native and resident of Chauvin, died at 11:57 a.m. Tuesday, Dec. 30, 2014.
Visitation will be 5-8 p.m. Friday, Jan. 2, at Chauvin Funeral Home in Houma and from 9 a.m. until funeral time Saturday, Jan. 3, at St. Joseph Catholic Church. A military service will be at 10 a.m. Saturday and a Mass of Christian Burial will be at 11 a.m. Saturday at the church, with burial in the church cemetery.
He is survived by his wife of 46 years, Sheryl Marie LeCompte Pitre; sons, William "Bill" John Pitre and Brad Michael Pitre and wife, Alexa; daughter, Tonilynn "Gep" Marie Pitre Hebert and fiance, Jason Guy; son-in-law, Tommy Hebert; brother, Chris Joseph Pitre and wife, Patricia "Pat"; sister, Jane "Jennie" Pitre Oblander; grandchildren, Tyler and Alaina Hebert, Reese Bergeron, Brayden, Breland and Raelyn Pitre; and granddaughter, Jalyn Guy, on the way.
He was preceded in death by his parents, Reynold Joseph and Ena Marie Theriot Pitre; son, Michael David Pitre; brother, Dale Phillip Pitre; and grandparents, Mr. and Mrs. Marius Pitre, and Sidney "Pete" and Annie Theriot.
Raymond was a parishioner of St. Joseph Catholic Church. He proudly served in the U.S. Army as an E-5 during the Vietnam War and was awarded two bronze star metals, one of which was for valor. He was a member of the VFW and American Legion. He was a retired boat captain and enjoyed fishing and restoring his 1984 El Camino. He was a loving husband, father, grandfather, son and brother. He was known to his grandchildren as "Pappy". He will be greatly missed by all.
To send condolences please visit www.chauvinfuneralhome.com.
Chauvin Funeral Home in Houma is in charge of arrangements.

To plant trees in memory, please visit our Sympathy Store.
Published by Houma Today from Jan. 2 to Jan. 3, 2015.
MEMORIAL EVENTS
No memorial events are currently scheduled.
To offer your sympathy during this difficult time, you can now have memorial trees planted in a National Forest in memory of your loved one.
Funeral services provided by:
Chauvin Funeral Home - Houma
MAKE A DONATION
MEMORIES & CONDOLENCES
13 Entries
May the memories of your loved one comfort you at this time of your loss. So sorry to hear of the passing of Raymond. With deepest sympathy.... Dinah and Buddy Chambliss
Dinah and Buddy Chambliss
January 4, 2015
I would like to send my deepest condolences to your family. We will always miss you at Golden Corral. Sending Prayers
Miss Gee Sumrall
January 3, 2015
He will be missed.
Linwood (Boogie) Belanger
January 3, 2015
So sorry for your loss. Sending prayers for all of you.
January 3, 2015
My sympathies and prayers are with your family at this sad time. God bless you all.
James Perez
January 3, 2015
Our prayers go out to you. With deep sympathy at your loss.
Will and Beverly Theriot
January 3, 2015
Sending prays for u and your family. Will miss him . His laugh his jokes he is and alway will be missed by all of us at Golden Corral . Love you.
Linda Bonvillain
January 3, 2015
Sorry for your loss. Our prayers are for you and your family. Steve was not feeling good today, so sorry we had to miss going to see you. Sending our prayers and sypathy from Charlotte and Steve
Charlotte Champagne
January 2, 2015
So sorry for your loss.
Belinda bourgeois adams
January 2, 2015
Sending prayers to I miss Sheryl may he fly in heaven with his family and friends
angel brunet
January 2, 2015
Our thoughts and prayers are with the family.
Evelina Boudreaux
January 2, 2015
We send our condolences to Sheryl and the family at this time. We know that he will be missed by all.