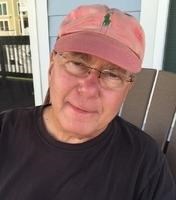 FUNERAL HOME
Carnes Brothers Funeral Home
1201 Tremont Street
Galveston, TX
Dan Ives
1947-2021
Dan Ives, 73, of Galveston, TX passed away unexpectedly on September 19, 2021 following a battle with Multiple System Atrophy and Parkinson's. Dan was born December 10, 1947 in Hanover, NH to Almon Bingham Ives and Mary Elizabeth (Abraham) Ives. He graduated from Hanover High School in 1966 and from the University of Maryland with a BA in 1970 and a BS in 1975. After becoming a CPA in 1979, he had a distinguished professional career as an energy rate consultant, speaking nationally and testifying before the Federal Energy Regulatory Commission. His employers included Washington Gas and Electric, Algonquin Gas Transmission Company, ANR Pipeline Company, Lukens Energy Group/Black & Veatch Corporation and he consulted privately. He was a member of the American Institute of CPAs and the Houston chapter of the Texas Society of CPAs, as well as the Past Chair of the American Gas Association's Rate and Strategic Issues Committee. In retirement, he volunteered with the SPCA in Houston and the Salvation Army in Galveston. He was an active member, with his wife Kathy, of Moody Methodist Church in Galveston.
Dan was an avid sailor, skier, runner, and reader. In his youth, he was a volunteer firefighter and (to his parents' horror) was on the hose line for the Lebanon Fire of 1964. He loved dessert, a glass of Chardonnay, and doting on his dogs. He was generous and kind-hearted, proud and stubborn. He had an irreverent sense of humor (his sailboat was named "Windbreaker," an inside joke) and collected ball caps. He lived in New Hampshire, Maryland, Massachusetts, and Michigan before settling in Houston, where he met Kathy, a fellow sailor, whom he married in 2005. They moved to Galveston in 2014, where he loved to sit on his deck, listen to the waves and enjoy his ocean view. He deeply loved his family; he was so proud of his children and grandchildren.
He is survived by his wife, Kathy Mitchell Ives of Galveston; his children Amy, Eva and Eric Lenier Ives and their mothers, his former wives, Mary Helen Ives and Carla Anderson; his stepchildren Lindsey Gregory and Matt Stockdale, his grandsons Sean and Brett Wilkins, and Tripp and Danny Sroka, and Teagan Gregory; his brother Ward (Marge) Ives; his sister Ellen (Colleen Johnson) Ives; his sisters-in-law Wina (Will) Litchfield and René Mitchell and numerous nieces and nephews. He is predeceased by his sister Martha Owens and her family, Robert Owens and Sarah and Laura Owens, who died in the bombing of Pan Am 103, and by his parents.
"As his ship sailed from our shore, we waved farewell and said "There he goes" until he crossed the horizon and was lost to our sight. But on the other shore they saw him coming over the horizon and said "Here he comes!"" (Adapted from the Parable of Immortality by Rev. Luther Beecher)
Service was held at Moody Methodist Church Galveston on Saturday, September 25, 2021. Burial will be in Hanover, NH at a future date. In lieu of flowers, the family requested contributions to the Galveston Humane Society, the Galveston Coast Guard, the Galveston Salvation Army, or the MSA Coalition.
Published by Houston Chronicle on Sep. 26, 2021.
To plant trees in memory, please visit the Sympathy Store.
MEMORIAL EVENTS
Sep
25
Visitation
10:30a.m. - 11:00a.m.
Moody Methodist Church
Galveston, TX
Sep
25
Service
11:00a.m.
Moody Methodist Church
Galveston, TX
Funeral services provided by:
Carnes Brothers Funeral Home
MAKE A DONATION
MEMORIES & CONDOLENCES
Sponsored by Carnes Brothers Funeral Home.
2 Entries
Oh, Kathy, I send my heartfelt sympathy. I have just learned of Dan´s passing. I do have some fond memories of you and Dan. He was a special person. My love and blessings , Susan
Susan Whiteneck
October 2, 2021
Kathy, I'm so sorry for your loss, and am thinking of you and your family. Enjoying all the memories of the good times! Love, Chris
Christina Hunt
Friend
September 26, 2021
Showing 1 - 2 of 2 results