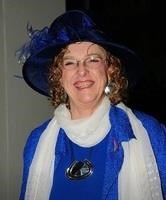 BORN
1948
DIED
2018
Diane Mosier
1948-2018
Diane Mosier was born August 15, 1948 in Beaumont, Texas, and passed away at home in Houston, Texas on Friday, June 29, 2018. Diane was the oldest of seven children born to Betty Nan Evans Dickson and John Lewis "Buddy" Evans. She attended Beaumont High School and Lamar University. After moving to Houston, Diane married the love of her life, Bruce Mosier, on November 17, 1973.
Diane was a small business owner in the 1980s, but she really hit her stride when she became active in politics, first as a campaign organizer and fundraiser, then working for numerous political officials including State Rep. Jessica Farrar and Judge David Patronella, and most recently as Community Liaison for Harris County Precinct One Commissioner Rodney Ellis. Diane was the heart of ROADwomen (River Oaks Area Democratic Women), serving as president of this state political action committee from 2010 to 2016. She was the current political chair.
Diane is preceded in death by her beloved husband Bruce, her parents, and brothers John and David. She is survived by her daughter, Carli Mosier, sisters Nancy Beyer, Susan Jabbusch, Paula Mandaglio and brother Mark Evans. She was also a loving and supportive stepmother to Bruce's three children, Tammy Thompson, Laura Ford and David Mosier, and granddaughter Catie Moss, whom they raised as their own. She also leaves behind six other grandchildren and one great-grandson.
Diane relished her role as wife, daughter, sister, mother, grandmother, friend, activist, advocate and mentor. Anyone who knew her would be hard pressed to decide which role she performed best because she was great at them all! Many tributes have already been posted on Facebook and Twitter describing Diane as a champion for women and justice, loyal, amazing, advocate, fighter, inspirational, energetic, devoted, community leader, tireless supporter of others, teacher, my light, mother tiger, great lady, mentor, hellraiser, freedom fighter, feisty, Sunshiner and a treasure. She has been described by those closest to her simply as "Our Diane." The ache in our heart is heavy, but the joy we feel for her arrival safely home with Bruce is great.
A celebration of Diane's life will be held on Saturday, July 21, 2018, 1:00-4:00 p.m. indoors at The Community of Faith Church, 1024 Pinemont Dr., Houston, TX 77091, (713) 688-2900. If you would like to honor her, please donate in Diane Mosier's memory to either her passion project, Sisters United (www.harrisdemocrats.org/sisters-united) or The Houston Area Women's Center (www.hawc.org).
Published by Houston Chronicle on Jul. 8, 2018.
To plant trees in memory, please visit the Sympathy Store.
MEMORIAL EVENTS
Jul
21
Celebration of Life
1:00p.m. - 4:00p.m.
The Community of Faith Church
1024 Pinemont Dr, Houston
MAKE A DONATION
MEMORIES & CONDOLENCES
8 Entries
Diane, was bigger than big in everything she did in every life she touched. A hug and smile were always there waiting to be accepted. When asking for anything it was always out of her passion for the project she was working on, making it easy to say "yes" to her ask. I will miss her hugs, smiles, and her passion given so freely to all of us.
Karen Wheaton
July 21, 2018
Diane was a member of The Fraternal Order of Eagles, Houston #63 Auxiliary in the Heights area! She will be missed by her fellow Eagle Sisters. We are so sorry for her Family's loss! May GOD give them peace, comfort, and strength! - Houston #63 Auxiliary - F.O.E.
Shellye Connell
July 13, 2018
My heartfelt condolences to the family. Diane will be missed. She left behind a" legacy " of hope for women to strive for a better future in our communities.
Stephanie Colligan-ishola
July 11, 2018
Thank you!
Lynda Burchett
July 11, 2018
Diane was such an energy force. Full of fun, adventure and ideas and a willingness to use all of her talents to make this world a better place. I still struggle with the idea that I can't just call and get her on the phone. She was a mentor to so many of us, an inspiration and a motivator. Diane, you are one of a kind and will be forever in our hearts.
July 9, 2018
Diane, I will miss you. Though our time together in ROADwomen was brief, I learnt a lot from you.
You were a good mentor.
Rufi Natarajan
Rufi Natarajan
July 9, 2018
Diane, my dearest friend, I will miss you forever and ever.
Cyd Dillahunty
July 8, 2018
Thank you my friend for all you accomplished and for a legacy of service. I wish you eternity with Bruce and success organizing the Angels in Heaven. Remind them to state their names three times.
Clinton Chip Wells
July 8, 2018
Showing 1 - 8 of 8 results