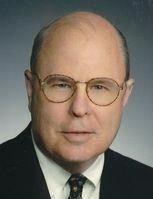 BORN
1932
DIED
2018
FUNERAL HOME
Grimes Funeral Chapels
728 Jefferson Street
Kerrville, TX
GUS AUGUST SCHILL
1932-2018
Gus August Schill, Jr. died on March 25, 2018 at his home in Kerrville, Texas. He was born on November 12, 1932 in Houston, Texas. His parents, Gus A. Schill and Beulah Ferguson Schill, and his sister, Carolyn Schill Rappazzo, predeceased him. He is survived by his wife of 56 years, Kay Gorges Schill, and their children, Mary Martha Schill and Steven August Schill.
Gus graduated from Rice University in 1955 with a Bachelor of Arts degree and from the University of Texas Law School in 1958, where he was a member of Phi Delta Phi. During his 39 year law career in Houston, Gus specialized in Admiralty law at Royston, Rayzor, Vickery & Williams. He also taught Admiralty law as an adjunct professor at the University of Texas Law School and then at the University of Houston Law Center. He was awarded the Honorary Alumnus Award from the University of Houston and the A.A. White Outstanding Professors Award in 2000. He published many articles on admiralty topics and legal ethics and often spoke at legal seminars.
Gus was president of the Alumni Association of Rice University in 1972-73 and was awarded their Distinguished Alumni Award. He was a member of the Rice Board of Trustees from 1994 to 1998. He was also a member of the Board of the Friends of Fondren Library at Rice. In 2016 the Rice Alumni Assn. presented Gus their highest award, the Gold Medal for Service to Rice.
If you spent much time with Gus, you soon learned of his affection for and loyalty to Rice. After twenty-five years of summer vacations in Hunt, Texas, often featuring his signature peach preserves, he retired to Kerrville. He passed his Rice memories on to countless high school students as a volunteer representative of the Rice Admissions Department in the Texas Hill Country.
In Kerrville he was a volunteer Court Appointed Special Advocate (CASA) for foster children. He also became a member of Zion Lutheran Church and served on their Church Council.
Memorial services will be held at 11 AM, Thursday, March 29, 2018 at Zion Lutheran Church officiated by Pastor Mike Williams.
For those desiring, memorial donations may be made to a charity of your choice or to the Gus A. Schill, Jr. Scholarship in History, Rice University, P.O. Box 1892, MS 81, Houston, Texas 77251-1892 or to the Zion Lutheran Church, 600 Barnett Street, Kerrville, Texas 78028.
Condolences may be sent at grimesfuneralchapels.com.
Funeral arrangements are entrusted to Grimes Funeral Chapels of Kerrville.
Published by Houston Chronicle on Mar. 27, 2018.
To plant trees in memory, please visit the Sympathy Store.
MEMORIAL EVENTS
Mar
29
Memorial service
11:00a.m.
Zion Lutheran Church
TX
Funeral services provided by:
Grimes Funeral Chapels
MAKE A DONATION
Please consider a donation as requested by the family.
MEMORIES & CONDOLENCES
Sponsored by Grimes Funeral Chapels.
13 Entries
Gus Schill embodied for me as a young lawyer what it meant to be well informed, collegial, and service-oriented. He wanted nothing more than to bring up young lawyers to be models for the profession. I wish we had stayed in touch after I left Royston, Rayzor.
Robert Kinney
Coworker
October 11, 2020
Gus Schill was one of my favorite professors at The University of Houston Law Center. His knowledge and passion for admiralty law were inspiring.
Nicole (Rubenstein) Tennenhouse
October 18, 2018
I met Gus through his sister, Carolyn Rappazzo, when Gus would come to Carolyn's Sunday Scool parties. I always enjoyed talking to Gus and Kay. I enjoyed hearing about Gus's interest in Rice University. I am very sorry for your loss.
Lisa Milam, Houston TX
Lisa Milam
April 23, 2018
I was heavily recruited to the firm by Gus. I loved him. I had a love/hate relationship based on our stubborn beliefs we were always right. After I left the firm I wrote Gus a letter telling him how much he meant to me as a person and as an attorney. I carried it around for 10 years and last year finally sent it. I can't express that I was hurt and blinded by tears that he had died and I could not speak with him one last time. thank you Gus for what you gave me, for helping make me who I am and helping shape my children. I could not have been prouder to have been mentored by you.
Justin Williams
April 5, 2018
When we lose a loved one, they become a memory, in turn, that memory brings joy to your heart. May you hold on to those memories of your dear loved one. My condolences for your loss.
March 30, 2018
I started my career as a maritime lawyer in 1977, and very early in my career my boss Tod Dimitry took me to lunch with Gus. I remember coming away from that lunch with the impression that here was a lawyer that embodied the spirit of what it means to be a member of the maritime bar in terms of extraordinarily high standards of ethical conduct, professionalism, contribution to the profession, and collegiality. That initial impression was reinforced year after year as I dealt with Gus. The maritime bar has lost one of its giants, and I will miss him as a friend.

With sincerest condolences,
Hal Watson
President, Maritime Law Association of the United States
Hal Watson
Friend
March 29, 2018
We are greatly saddened by the news of Guss's passing. A gentle man who was a good lawyer.
Sharon & I always enjoyed his trips to New York for the Maritime Law meetings & his sense of humor. He was a delight to be with.
Our sympathy to Kay & the family.
God bless.
Bob Mahar
March 29, 2018
Bob Mahar
March 29, 2018
Gus was a wonderful mentor to countless students and young (and no longer young) lawyers. He will remain in my mind the best example of ethics and professional courtesy in a lawyer. My sincere condolences to the Schill family.
Josh Thomas
Friend
March 27, 2018
Dearest Kay and family, I am so sorry for your loss. I admired and liked Gus so much. He was smart, witty, fun, savvy. He will be missed. I am holding you in my heart. Blessings and much love, Carol
Carol Allbritton
March 27, 2018
Professor Schill is one of my favorite people. I supported him for over 10+ years in his role as Adjunct Professor at the University of Houston Law Center. I looked forward to his visits prior to his classes. And the laughs.....always. Often when the season was right, he would surprise me with a jar of his homemade peach preserves. Oh, what a treat. Professor Schill was a sweet and gentle man. He was a friend. I will always remember his grand stature and kind heart. I have missed him since his retirement from the Law Center but recall fond memories of his love for the craft of teaching the law to his students. He was very passionate about his teaching, and the students loved him, as did we all. Condolences to Mrs. Schill and the family. God bless you during this difficult time.
Melissa Fleet
Coworker
March 27, 2018
Gus was a terrific human being. May God bless Gus Shill and his family during this difficult time.
Meredith Duncan
Coworker
March 27, 2018
I adored Gus--for his devotion to Rice, for his devotion to the ethical practice of law, for his mentorship of so many people. He was a truly great man, and my thoughts go out to his family.
Nancy Rapoport
March 27, 2018
Showing 1 - 13 of 13 results