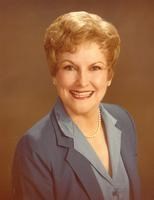 BORN
1927
DIED
2015
FUNERAL HOME
Forest Park The Woodlands Funeral Home
18000 Interstate 45 S
The Woodlands, TX
Jean Davis Myers
1927-2015
Jean Davis Myers was born Betty Jean Harvey to Mae Lynn and Leslie Harvey on August 16, 1927 in Houston, Texas. She traveled many places throughout the world in retirement and work, but always returned to Houston, her home.
She is survived by her devoted son Barry James Davis and daughter-in-law Erin Davis, granddaughter Nicole Moore, grandsons Barrett and Evan Davis; great-grandsons Connor Moore and Kingston Davis; her brother James Harvey and his wife Joan from Galveston. Her sister Evelyn and her brother-in-law Felton Lloyd have predeceased her.
Jean was a professional educator, retiring after 34 years in the Houston Independent School District, serving as a classroom teacher, counselor, assistant principal and executive director of community relations and volunteer services. She was chosen to develop and direct the newly created Volunteers in Public Schools (VIPS) in 1970. Under her leadership, VIPS became a national model, receiving many coveted awards. She led the way in creating partnerships between public schools and the business community. She served as president of the National Association of Partners in Education.
Since 1991, The "Jean Davis Myers Award for Community Service" has been presented annually by HISD. She was a member of Board of Directors of I Have a Dream – Houston, The Volunteer Center, Houston Association of Volunteer Administrators and School Administrators. Jean was also active with TSTA, Houston Hospice, Who's Who International and Harris County Appraisal Review Board.
According to Jean and those who knew her, she had a wonderful life – personally, professionally and privately.
In lieu of flowers, please contribute to the American Red Cross.
A memorial service will be held in her honor at Forest Park The Woodlands Funeral Home on Tuesday, June 09, 2015 at 11:00am.

My deepest sympathy, Barry, at the passing of your dear mother. I so loved her- you were very blessed all these years to have her.

Renee Switzer Kelly
June 10, 2015
Thank you so much Barry for letting me know about Jean-we have pretty much lost touch since our retirement years but she did call me occasionally.
I have had lots of health problems,too, in the last couple of years but we always kept in touch by the occasional phone call I received from Jean.
I am one year older than Jean was and am living in a very nice retirement home here in Ft. Worth.
About 8 years ago Chuck passed through here for a short visit and stayed overnight with my son Scott etc. for one night-I have not heard from him since.
My husband,Rudy, passed away from cancer in 2003-I still miss him alot but who knows about me -I had a grandmother who lived to be 92.
I had a heart attack a few years back and have spinal stenosis so I hobble around on a cane. One son and his sweet wife live here, another is a doctor in Mobile, Al. and the youngest ,who graduated from Sterling High School lives in the D.C. area-he's a computer engineer.
It was so thoughtful of you to let mr know about Jean- My health has been so bad in the last few years that I'm really surprised that she has preceded me.
Your Mom ws always so proud pf you , Barry.
Sincerely,Abbie
June 8, 2015
Words can elicit only faintly the appropriate praise for the quality of the work Jean did in the 1970s for the Volunteers in Public Schools (VIPS)in the Houston Independent School District. These volunteers under Jean's direction made significant contributions to the educational success of the quarter million children in our care. Early screening for vision of HISD students was a nationally acclaimed project. It was one of many that extended services vital to the district. Done with professionalism and gentle guidance Jean's dedication was a hallmark of her outstanding service. The entire Board of Education honored her contribution.
George Oser, Ph.D.
June 8, 2015
Dear Barry and Family,

Please accept my most sincere condolences on the loss of your mother. Ms. Myers was my American History teacher at John H. Reagan H.S. in 1962-63. I was also privileged to work in the counselors' office during my senior year under your mother, Mr. Taylor, and Mr. Willis. As a teacher in H.I.S.D., I followed her career as the V.I.P.S. developer and director. She was a beautiful lady both inside and out! She had a wonderful sense of humor, too. I know that you have many wonderful memories that will sustain you during this time. May God wrap His loving and comforting arms around you and your family.