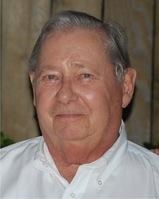 Joseph Louis Brown II ""Brownie"", 87, passed away peacefully Sunday, September 14, 2014.
Only child to Joseph Louis and Marie Weinheimer Brown of Houston, TX, Joe grew up in Houston, graduating from Lanier Middle School and Lamar High School.
After high school, Joe spent a semester at Texas A&M and later entered the Naval Officer Training Program at Southwestern University. He then attended the University of Texas in Austin earning a Business degree and was a member of Phi Delta Theta fraternity.
Following his graduation, he worked for Creole Petroleum in Venezuela where he became fluent in Spanish. Later, he returned to the University of Texas to earn his geology degree and spent the next 3 years as a barite specialist.
Inspired to work for himself, he decided to make a career shift by opening a record store called the ""Disc Count House"" off Bissonnet near Kirby and later founded Home Entertainment, Inc. in 1957. Shortly thereafter, he married his true love, Marie Collonge of Dickinson, TX on October 13, 1962
He successfully grew Home Entertainment to include 10 locations in Houston and Dallas, eventually adding Auto Entertainment. He sold the company in February 1999. In addition, he also founded Industrial Audio Video, Inc. an affiliate of Home Entertainment in 1971, still in business today.
He was a long time member of St. Luke's United Methodist Church, a member of the Executive Breakfast Club, and a member of River Oaks Country Club where he enjoyed golf. He was an avid fisherman and tennis player for many years and followed sports closely.
Joe was a dignified man and known for his great integrity in all matters. His last concerns were always for his family and that they would be okay without him. He was fair and generous on all counts, extremely hard-working and never knew a stranger. Throughout his life he served as a business mentor to many and treated everyone he met with great respect and courtesy. He always showed great concern for his employees.
He is survived by his devoted wife Marie Brown, daughters Erin Brown and Julie McMahon, son in law Kevin McMahon, of Houston, as well as five grandchildren: Joe, Gwyneth, David, Lillian and Genevieve McMahon who adored him and loved spending time with their grandfather. They will miss him dearly. He is preceded in death by his son, Joseph Louis Brown, III (Louis).
He is also survived by lifelong friends and his new friends within the community at The Hallmark. The family would like to extend their heartfelt thanks for the compassion, love and support they received and continue to receive from The Hallmark.
The family will be hosting a memorial service in the community center of The Hallmark (4718 Hallmark Drive) at 10:00am on Thursday, September 18, 2014. In lieu of flowers, that family requests that donations be made to the Alzheimer's Association in honor of Joe's wife, Marie.

To plant trees in memory, please visit our Sympathy Store.
Published by Houston Chronicle on Sep. 16, 2014.
MEMORIAL EVENTS
No memorial events are currently scheduled.
To offer your sympathy during this difficult time, you can now have memorial trees planted in a National Forest in memory of your loved one.
MAKE A DONATION
Please consider a donation as requested by the family.
MEMORIES & CONDOLENCES
Sponsored by Kevin Buchanan & Family.
17 Entries
So sorry to hear of my cousin's passing. I have been living on Guam for some years.
Richard Brown
April 24, 2016
Joe was a great person and friend. We remember the good times, his humor and knowing smile.
John and Helen Kiefer
September 18, 2014
Joe was a fine person whom I knew from the early days of the Disc Count House and later Home Entertainment and IAV. I haven't kept in touch in the last few years. May he rest in peace.
Bill Cushman
September 17, 2014
As an employee working for Joe for 17 years I can say that he was a great man and a rare example of great leadership. The measure of a man is not in his monetary wealth, but the positive effect he has on the people around him. In this he was truly wealthy as he set a great example for me and everyone I worked with. We worked hard for Joe because we liked him and did not want to disappoint him. His principles led us as employees and business people to be successful in our lives after we left his employ. My sincere condolences to Marie, Julie and Erin! May he rest in peace and contentment due to the great positive effect he has had on so many others.
David Green
September 17, 2014
I am very proud to call Joe a friend and mentor. Joe gave me an opportunity when I needed it and I will never forget that. I enjoyed working for and with him for 19 years at H.E. He had a great sense of humor and loved trading fishing stories. He was always there for me with sage advice, generous support and leadership. Joe was an authentic Texas gentleman that we should never forget. My prayers are with Joe and his family.
Steven Teel
September 16, 2014
My deepest sympathy goes to the friends and family of Mr. Brown.May God a source of support in these sad times. My he give you the strength to continue as we wait for the time when we will be able to see our loved ones again. (Acts 5:28).
September 16, 2014
Joe Brown will be fondly remembered as both a gentleman and one of the true pioneers of audio/video industry here in Houston. His door was always open, and whether we were discussing the actions of the local competition, or the accomplishments of one of his kids, I will always treasure our friendly conversations & his timely sage advice.
Dave Melbourne
September 16, 2014
I had been laid off as a disc jockey and had an interest in stereo. I had never worked in sales, but I stopped in at the Kirby store to ask about work. Joe hired me and began a 37 year run. It was always a pleasure to know that I could stroll around the corner and drop into the office of the owner of the company anytime for a visit. He is dearly missed as is the company he founded. My condolences to the family.
Mike Marshall
September 16, 2014
So sorry to hear about Joe Brown today. Joe was one of the most gentlest individuals you could ever know and we had nothing but respect for Mr. Brown. Condolences to the family...
Joe Smith
September 16, 2014
I am saddened by the passing of Joe Brown and mourn for his family that feel the pain of their personal loss.

I distinctly remember the moment I first me Joe in 1987. He welcomed me as I would an old friend.
Paul Collins
September 16, 2014
It is with a heavy heart that I note the passing of my former boss and mentor, Joe Brown. We pray for Joe's family as they put their beloved patriarch to rest. Joe was fair and generous to a fault with me as a young man, taking a chance on a wet-behind-the-ears youth when no one else would, and taking time out of his busy life to teach me the tough lessons. I will always be in his debt.
Charles Thoompson
September 16, 2014
Joe was the kindest and most patient man I have ever met. After 19 years of working for him, he was the most influential person in my life. Even when I let him down, he always showed compassion, fairness, and guidance. In my heart I always thought of him as a surrogate father. There are many who are grateful for having known him, and we have all been blessed by having him in our lives. I will always miss you Joe. My condolences to the Brown family. My heart goes out to you all.
Kevin Buchanan
September 16, 2014
I am sorry for your loss. Death is the opposite of life. God can awaken those who have died just as surely as you can awaken a person from sleep. Mark 5:22, 23, 41, 42.
September 16, 2014
My condolences to Joe's family and friends. I only met Joe once but I know him to be a man of good character and that his business principles in our electronics industry began and ended with integrity.
Buzz Delano
September 15, 2014
My heart sank when I heard the news. Joe was a great man with compassion for everyone that he came in contact with. I truly enjoyed the ten years that I worked for him at Home Entertainment. He guided me through some of the best years of my life! My prayers go out to all of his family. I know he inspired many to be greater than they thought they could reach in this world.
Rhea Robison
September 15, 2014
I'm sad to learn today that my former boss, Joe Brown, founder of Home Entertainment, Inc., passed away yesterday. Joe was such an honorable and good man. I loved him. He did a lot for me and literally brought me up and in this business. I salute you Joe! Deepest condolences to Marie, Julie & Erin and families.
Roberta Lewis-Hightower
September 15, 2014
You will be missed Joe, my prayers are with your family at this time.
Ricky Gilbreath
September 15, 2014
Showing 1 - 17 of 17 results