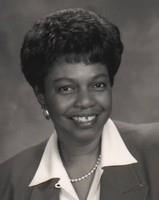 BORN
1944
DIED
2019
FUNERAL HOME
McCoy & Harrison Funeral Home
4918 MARTIN LUTHER KING
Houston, TX
Judy Johnson
1944-2019
On September 25, 1944, Judy was the third child born to Luella & Arnold Taylor in Houston, Texas.
Judy started her educational journey at E. O. Smith Elementary School in Houston. She was valedictorian of the Kashmere High school class of 1961. She is a graduate (1961-1965) of Hampton University in Hampton Virginia with a BS in mathematics.While attending Hampton University, Judy was an active member of Delta Sigma Theta Sorority, Inc.
She was chosen as a member of the Executive Exchange program of The President's commission on Executive Exchange 1989-1990 in President George Bush Administration. As a member of the group she met the ambassadors of several United States embassies in Europe. The group had an audience with Pope John Paul II.
Judy was selected as a member of "21 Women of Power and Influence in Corporate America" in August 1991 issue of Black Enterprise magazine. Judy served as a White House Volunteer in President Bill Clinton's administration. Judy took an early retirement from IBM.
We returned to Texas on September 1999.We joined the Brentwood Baptist Church, Judy attended until being confined to her home. Judy was able to fulfill one of her desires. Judy enrolled in the South Texas Law School for a year.
On October 17, 1971 Judy A. Taylor and Laray Johnson were married in Houston Texas. For the next 48 years they had a wonderful life and traveled throughout the United States, Canada, Caribbean and Italy with friends. The journey ended with her death on 12/31/2019 at her home.
Her home going services will be held on Saturday, January 11, 2020, visitation at 10:00 AM and funeral service at 11:00 AM. Both services will be held at Brentwood Baptist Church, 13033 Landmark St., Houston, Texas 77045.

Published by Houston Chronicle on Jan. 10, 2020.
To plant trees in memory, please visit the Sympathy Store.
MEMORIAL EVENTS
Jan
11
Visitation
10:00a.m. - 11:00a.m.
Brentwood Baptist Church
13033 Landmark St., Houston, TX
Jan
11
Funeral service
Brentwood Baptist Church
13033 Landmark St., Houston, TX
Funeral services provided by:
McCoy & Harrison Funeral Home
MAKE A DONATION
MEMORIES & CONDOLENCES
Sponsored by McCoy & Harrison Funeral Home.
6 Entries
May God's love bring peace and comfort to the family of Judy Taylor Johnson.
Margaret Giles Lee,Hampton Institute Class of 1965.
Margaret Giles Lee
February 1, 2020
Judy is the love of my life. We had many joyful events in our life. You will be in my memory until we meet again. Due to this event in our life, I must go on alone.
Laray Johnson
January 20, 2020
Judy was a wonderful friend; we shared many IBM experiences and l treasure my memories of her.
Lannois Neely
January 12, 2020
My heartfelt condolences to Judy's family. I was blessed to have Judy as a manager early in my IBM career and learned so much from her. I will keep Judy and her loved ones in my prayers.
Elena Suarez
January 11, 2020
To the family my condolences goes out. My sister Brenda often spoke of you and Mr Johnson. May God continue to hold your hand in this walk.
Constance Parker
January 11, 2020
Please accept my heartfelt condolences. My thoughts and prayers are with the family. I'm so sorry for your loss. May the God of all comfort be with you during this difficult time to comfort you and give you strength.
C K
January 11, 2020
Showing 1 - 6 of 6 results