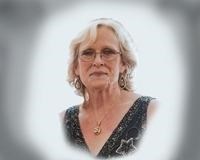 BORN
1958
DIED
2019
FUNERAL HOME
Geo. H. Lewis & Sons Funeral Directors
1010 Bering Drive
Houston, TX
Lori J. Stout
1958-2019
Lori J. Stout, age 60, passed away peacefully at home with her family at her side on Tuesday, the 15th of January 2019, in Houston, Texas. Born on the 17th of July 1958, in Cleveland, Ohio, Lori was welcomed by adoption into the family of John Edward Scott and Bertie Mae Scott (Welch), who served as her beloved parents, bot h of whom have predeceased her.
Lori spent her early life in Whitehall, Ohio, a suburb of Columbus, Ohio, where she participated in ballet and singing competitions in addition to the Whitehall Yearling Marching Band. Lori graduated from Whitehall-Yearling High School in 1976 and shortly thereafter began her career at the Ohio Bureau of Motor Vehicles, where she later met her future husband, Mark D. Stout of Groveport, Ohio. Lori and Mark were married on the 27th of May 1983, moved to Houston, Texas and spent 35 blissful years thoroughly in love until her recent passing.
Lori and Mark have three loving and devoted children, Nicole Cassandra Kacanda (Stout), age 32, of Pearland, Texas, Eric Nathaniel Stout, age 29, of Houston, Texas, and Kevin Michael Stout, age 26, of Houston, Texas. Lori loved raising their children and enjoyed many school events as they grew up. Lori loved gardening as evidenced by the many house plants and lovely flower gardens that surround their home. She also loved crafting and operated a home business named Special Touch through which Lori made lovely special event baskets. On Sunday afternoons in the fall, Lori greatly enjoyed NFL football and often could be heard throughout the house yelling and cheering for her favorite teams, of which she had many, including the Minnesota Vikings and Houston Texans. Lori and Mark were overjoyed when Nicole married Brett Kacanda in September 2015 in Denver, Colorado. Brett and Nicole now reside in Pearland, Texas and recently blessed Lori and Mark with their first grandchild, Evelyn Rose Kacanda, who was born in October 2018. Lori loved life and was as cheerful and fun-loving as the colorful clothes she often wore. She was a bright light in many lives even during her battle with breast cancer that ultimately took her life.
Lori is predeceased by her father and mother, John Edward Scott and Bertie Mae Scott (Welch) and her father-in-law, John Paul Stout. She is survived by her husband, Mark; her three children, Nicole, Eric and Kevin; her granddaughter, Evelyn; her brothers John Daniel Scott, James Edward Scott, and Reverend Thomas R. Scott; sisters-in-law Kathleen Scott (spouse to John Scott) and Linda Scott (spouse to Thomas Scott), her mother-in-law, Rose Helen Stout, Brett's parents who Lori adored, Greg and Patricia Kacanda, Yeraldin Morales, beloved of Kevin Stout, and many nieces, all of whom will truly miss Lori's presence in their lives. Lori brought sunshine and beautiful color to all the lives she touched. We will truly miss her smile, energy, and wonderful spirit.
Friends are cordially invited to a visitation with the family from five o'clock in the afternoon until seven o'clock in the evening on Monday, the 21st of January, in the library and grand foyer of Geo. H. Lewis & Sons, 1010 Bering Drive in Houston.
A funeral service will be conducted at eleven o'clock in the morning on Tuesday, the 22nd of January, in the Jasek Chapel of Geo. H. Lewis & Sons. Immediately following, all are invited to greet the family during a reception to be held in the adjacent grand foyer.
Lori was generous with her time, talent and treasures and supported many charities throughout her life. In lieu of customary remembrances, please make a donation in Lori's honor to a charity of one's choice.

Published by Houston Chronicle on Jan. 20, 2019.
To plant trees in memory, please visit the Sympathy Store.
MEMORIAL EVENTS
Jan
21
Visitation
5:00p.m. - 7:00p.m.
Geo. H. Lewis & Sons Funeral Directors
1010 Bering Drive, Houston, TX
Jan
22
Funeral service
11:00a.m.
Jasek Chapel of Geo. H. Lewis & Sons
TX
Funeral services provided by:
Geo. H. Lewis & Sons Funeral Directors
MAKE A DONATION
Please consider a donation as requested by the family.
MEMORIES & CONDOLENCES
Sponsored by Geo. H. Lewis & Sons Funeral Directors.
3 Entries
Lori was one of the most FUN people I ever met. Our daughters were buds in elementary school, and I was always glad to see Lori at kid events. I knew all would have a good time! Our planet has lost a great one.
TOM ALLEN
January 22, 2019
What a joy Lori was to know. She was beautiful, charming, and full of life. Her enthusiasm seemed boundless. May knowing that others share your grief be a comfort.
Love, Beth Allen
January 21, 2019
Those who pass on God keep in his memory because he cares for them sorry for your loss.
January 19, 2019
Showing 1 - 3 of 3 results