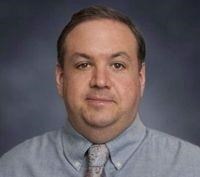 BORN
1977
DIED
2020
Matthew Erick Smith
1977-2020
Matthew Erick Smith, 43, passed away on Thursday, November 19, 2020. He was born on September 2, 1977, in Fairfax, Virginia, to Glenn and Karen (Brownlee) Smith. Erick graduated from McCullough High School in The Woodlands, Texas in 1996 and received his bachelor's degree from Our Lady of the Lake University in San Antonio, Texas.
Erick was preceded in death by his paternal grandparents, James and Zulma Smith; his maternal grandparents, Maurice and Juanita Brownlee; and his aunts, Marke (Smith) Lind and Judith Brownlee.
He is survived by his wife, Shelly (Dallof) Smith of Cypress, Texas, son Adam Smith of Cypress, Texas, and daughter, Marly (Smith) Nicholson and son-in-law Dillon Nicholson of Groves, Texas; his parents, Glenn and Karen (Brownlee) Smith of The Woodlands, Texas; his brother, Jason Smith, and sister-in-law, Jacqueline Fernandez of Houston, Texas; his aunt Kathy (Brownlee) Aldridge of The Woodlands, Texas; his nephews, Nathan Smith of The Woodlands, Texas, and Andrew Smith of Santa Fe, New Mexico; his cousin, Mandy (Lind) Brock and husband Jeff Brock and their son Jack Brock of Tomball, Texas; and his cousin Daniel Peak of Denver, Colorado. He also leaves behind numerous friends who will miss him greatly.
Erick was in his third year as an English teacher at Wunderlich Intermediate School in the Klein Independent School District. Prior to teaching, Erick worked in administrative positions in the CHRISTUS Health and Dubuis Health System. He was Vice President for Strategy and Development with Dubuis before he made a career change into teaching. He also received the 2006 CHRISTUS Administrative Star Award for Outstanding Performance, Dedication and Commitment. He was confirmed in membership in 2016 by Our Lady of the Lake University, to The National Society of Leadership and Success, Sigma Alpha Pi Chapter.
Erick was always passionate about helping others and volunteered with Christ Church Prison Ministry delivering Christmas Blessing Bags for ten years and serving with Kairos Prison Ministry at the Hightower Prison Unit in Dayton, Texas. He was a certified volunteer Mentor with the Texas Department of Criminal Justice. He was a certified exit team member Rescue Houston, partnered with Elijah Rising, working to remove individuals from sex trafficking in Houston.
Due to the current COVID-19 pandemic, Erick's family has postponed a Ceremony of Celebration of Life until a later and safer time.
Published by Houston Chronicle on Dec. 27, 2020.
To plant trees in memory, please visit the Sympathy Store.
MEMORIAL EVENTS
To offer your sympathy during this difficult time, you can now have memorial trees planted in a National Forest in memory of your loved one.
MAKE A DONATION
MEMORIES & CONDOLENCES
1 Entry
erik matthew smith was a good 6th grade teacher he was actually my 6th grade teacher and im actually in 7th grade now but whenever i was upset he would know how to calm be down super fast he would never yell at the students or take his anger out on the students for any reason he was the best teacher i ever had...
Daniel Torres
Student
March 30, 2021
Showing 1 - 1 of 1 results