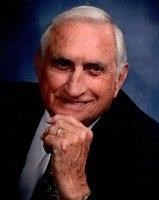 BORN
1933
DIED
2021
FUNERAL HOME
Earthman Resthaven Funeral Home
13102 North Fwy
Houston, TX
Sam H. Power
1933-2021
Sam H. Power, beloved husband, father, and grandfather passed away on September 3, 2021.
Sam was born in Bridgeport, TX on January 6, 1933 to Y.L. Power and "Annis" Pauline Power. In 1947 Sam and his family moved to Shreveport, LA where he graduated from Fair Park High School in 1950. He subsequently enlisted in the United States Navy during the Korean War. After discharge from the Navy he returned to Louisiana where he worked in construction prior to enrolling at the University of Houston. During his tenure at the university he married the love of his life Jo Ann, and they spent 62 happy years together.
He began his career while finishing his studies at the University, with a small Houston Company, developing control equipment for the Oil, Gas and Electric Utility industries. He remained with this company during its growth period of 31 years before retiring in 1992.
Sam believed his most outstanding achievement was his family. He is survived by his wife Jo Ann; sons, Michael and Stephen; granddaughter Katrina; sister Joy Thompson husband Jerry; brother-in-law Henry Hagedorn wife Neita; nephew Brett Thompson; nieces Stacy Landt, Donna Craven, Debbie Bothwell and Daneita Adams.
A visitation for Sam will be held on September 14, 2021 from 1:30-2:00pm
Funeral service will occur September 14, 2021 at 2:00pm at Earthman Resthaven Funeral Home, 13102 North Fwy Houston, Texas 77060. Interment to follow.
In lieu of flowers may be made in memory of Sam to Shriner's Hospital.

Published by Houston Chronicle on Sep. 12, 2021.
To plant trees in memory, please visit the Sympathy Store.
MEMORIAL EVENTS
Sep
14
Visitation
1:30p.m. - 2:00p.m.
Earthman Resthaven Funeral Home
13102 North Fwy, Houston, TX
Sep
14
Funeral service
2:00p.m.
Earthman Resthaven Funeral Home
13102 North Fwy, Houston, TX
Funeral services provided by:
Earthman Resthaven Funeral Home
MAKE A DONATION
Please consider a donation as requested by the family.
MEMORIES & CONDOLENCES
Sponsored by Earthman Resthaven Funeral Home.
1 Entry
Sam was a good friend and fellow employee of my brother in law, Lee Tully! They worked together at ICC, International Controls Corporation a subsidiary of Mission Manufacturers on Clay Road and Hempstead in Houston. The Company changed many names because if acquisitions but many of the old ICC fellows went the whole nine yards until retirement as it appears Sam did. I met Sam when I worked at ICC and considered him a good friend. He was an upstanding man and well liked by everyone that came in contact with him! Condolences to the family and go with full throttle up Sam! RIP!
LArry MUse
Friend
September 12, 2021
Showing 1 - 1 of 1 results