Whitney P. Dartez
WHITNEY P. DARTEZ, passed a way on May 18, 2008 in Houston, Texas. The son of Elia and Eulage Dartez, Whitney was born in Forked Island, Louisiana on January 5, 1933. Preceded in death by his daughter Charmaine Pugh, and son Gregory Dartez. Whitney is survived by his loving wife of 52 years, Flavie; his daughter; Amanda Dartez; his brother, Sidney Dartez; his grandchildren, Brandy Scaife and Clint Dartez; his great grandchild, Gavin Dartez, daughter-in-law, Melissa Dartez, godson, Tim Coomes. Services are pending at the Vincent Funeral Home in Kaplan, Louisiana.
To plant trees in memory, please visit our Sympathy Store.
Published by Houston Chronicle on May 20, 2008.
MEMORIAL EVENTS
No memorial events are currently scheduled.
To offer your sympathy during this difficult time, you can now have memorial trees planted in a National Forest in memory of your loved one.
MEMORIES & CONDOLENCES
Sponsored by FLAVIE DARTEZ -WIFE.
19 Entries
HAPPY BIRTHDAY MY BABY, THE HOLIDAYS ARE OVER WITH IT'S STILL HARD WITH OUT YOU AND CHARMAIME AND GREG. THINGS WILL NEVER BE RIGHT AGAIN, LOVE AN MISS YOU!!!!
January 5, 2010
Happy Birthday Pa........ We miss you so much! We will never stop loving you.....your always in our thoughts....We love you.....love ur bee & t
Mortese & Brandy Scaife
January 5, 2010
MY BABY, THE HOLIDAYS ARE OVER AND WAS LONLEY WITH OUT YOU. IT'S STILL HARD TO THINK OF THE FUTURE WITH OUT YOU. I MISS YOU AN JOE SO MUCH. LIFE IS NOT FAIR. WILL NEVER STOP LOVING YOU. BEE
flavie DARTEZ
January 24, 2009
MY BABY, WORDS CAN'T EXPLAIN HOW MUCH I MISS YOU. I STILL DON'T KNOW HOW I'LL GONE. I DIDN'T KNOW LOVE COULD HURT SO MUCH. I'LL SEE YOU AGAIN ONE DAY. LOVE YOU FLAVIE
flavie DARTEZ
June 30, 2008
Taunt Flavie, I am so sorry for you that Uncle Whitney is gone. I loved him so much and will miss him. I know it hurts that he is gone, but, know that he is with Charmaine and Gregory and he is happy that he can be with them again. I love you.
Gloria Roy
June 1, 2008
It still doesn't seem real that your gone.....Thank you for the unconditional love you showed me...and thank you for being a wonderful grandfather and teacher, our lives will never be the same without you here.....the only thing that makes this okay is that I know your with mom, daddy and googa.....we miss you more than you could imagine. Untill we see you again.....love your bee....
Mortese & Brandy Scaife
May 27, 2008 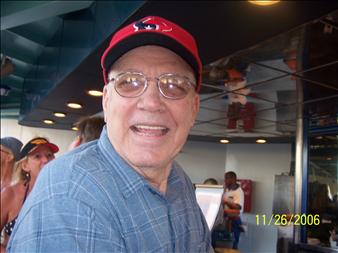 May 27, 2008
Dear Flavia and Family - Our deep and sincere sympathies are with you all as you mourn. However, we hope that the power of God's Love and Grace will console you and allow the Light to shine in your hearts, allowing your grief to evolve into nothing but joyous memories.
Thelma Istre
May 25, 2008
Mrs. Flavia & Mandy,
It saddened me to hear about Mr Whitney. I can close my eyes & see him doing his wave as he drove by the house when I was young. He was funny! I pray that God will comfort you during this time and ease the hurt.
Kelly White
May 24, 2008
We are saddened by your loss. Our thoughts and prayers are with you and your family.
Raymond & Little Mary Rivera
May 22, 2008
I never met Whitney, except through e-mail and his wonderful web sites on Acadian/Cajun genealogy. He will be greatly missed.
Karen Theriot Reader
May 22, 2008
Our thoughts and prayers to the family. Whitney was a good freind to me and Tyco.
Mike Chatagnier
May 21, 2008
At times like this we must all support each other. My prayers are offered in support of the family and friends of Whitney. May God be with you and all those who loved Whitney. He was a great help to me in my quest for genealogical information. He will be greatly missed.
Mary Jane Bernard
May 21, 2008
Flavie & Family
May God bless you and your family in this time of sorrow. Whitney will be missed by all his friends.

Jean Stelly
Houston, TX
Jean Stelly
May 20, 2008
My sympathy's to the Dartez Family.
I was helped many times over the years by Whitney and also his wonderful web site. Many Acadian/Cajun's have lost a dear friend and dear cousin. He did much for his genealogy community and his friends world wide. He will be deeply missed.
Linda Louviere d'Amours
May 20, 2008
My thoughts and prayers are with you Flavie, and your entire family.
Doug Presser
May 20, 2008
Fifi and family: I am so very sorry to hear of Whitney's passing. Please accept my sincere condolences. Peace and God's blessings to you and your family during this time, take it one day at time, know that God's grace and mercy will get you through this time of sorrow.
Ruthie Rideau
May 20, 2008
It's been a long time since I've seen any of the Dartez family but you're all in my thoughts & prayers.
Lisa Mora Williams
May 20, 2008
My sympathy to ALL the Dartez family.
I have exchanged genealogy info with Whitney and he will be greatly missed.
My prayers are with all of you.
Alvenia Thibodeaux
May 20, 2008
Showing 1 - 19 of 19 results