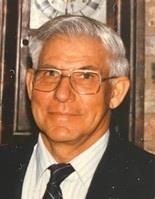 BORN
1923
DIED
2021
FUNERAL HOME
Advantage Funeral and Cremation Services
7010 Chetwood
Houston, TX
William James
Fairbanks
1923-2021
William James Fairbanks (Jim) was born in Hastings, PA on May 3, 1923, to Kathryn Luella Lear Fairbanks and James Eugene Fairbanks. He died on September 16, 2021 at 98 years of age in a northwest Houston nursing home, Villa Toscana at Cypress Woods. Jim was a loving father and husband to Sarah Kathyaleen Hill Fairbanks (Sally), his wife of 67 years, who predeceased him on January 25, 2013. The oldest of 11 siblings, Jim will be remembered for his inner strength and practical advice that friends and family long relied on. Jim was drafted after graduating first in his class from Hastings High School in 1941 and served in the army throughout the remainder of WWII, rising to the rank of Master Sargent. After the war he moved to Ann Arbor, Michigan, where he married Sally and completed a Master of Electrical Engineering degree at the University of Michigan. Following that graduation, he joined Shell Oil Company as an electrical engineer and worked on developing production field facilities across the southwestern United States. He loved music, and periodically would bring out his well-maintained coronet to practice the march music he kept with his other important papers. He retired from Shell as an engineering group leader in the Midland, Texas production office. He and Sally purchased land and built their dream home in Tyler, Texas in 1976, where they maintained close friendships with family and friends for more than three decades. During this period Jim pursued his love of teaching as an instructor at Tyler Junior College. Jim was diagnosed with dementia in 2010 and relocated to Houston to live with his eldest son after the loss of Sally. He maintained an inner strength and practical optimism through every challenge. He is survived by two sisters and a brother, Eleanor Larue Fairbanks, Norma Jean Fairbanks, and David Lee Fairbanks all residing in Warren, Ohio; three children, Barry James Fairbanks residing in Spring, Texas, Richard Wayne Fairbanks residing in Equinunk, Pennsylvania, and Barbara Lynn Fairbanks residing in Boise, Idaho; two granddaughters, Jodell Renee Fairbanks Ward residing in Medina, Ohio and Jillian Marie Fairbanks residing in Las Vegas, Nevada; and great grandchildren William and Emily Ward of Medina, Ohio and Cheraw, South Carolina respectively.
The family would like to express their gratitude to Jim's wonderful caregivers at Villa Toscana of Cypress Woods. A private memorial service is planned in Tyler, Texas later as schedules allow. Fond memories and expressions of sympathy may be shared at www.AdvantageHoustonFunerals.com for the Fairbanks family.
Published by Houston Chronicle on Sep. 26, 2021.
To plant trees in memory, please visit the Sympathy Store.
MEMORIAL EVENTS
To offer your sympathy during this difficult time, you can now have memorial trees planted in a National Forest in memory of your loved one.
Funeral services provided by:
Advantage Funeral and Cremation Services
MAKE A DONATION
MEMORIES & CONDOLENCES
Sponsored by Advantage Funeral and Cremation Services.
0 Entries
Be the first to post a memory or condolences.