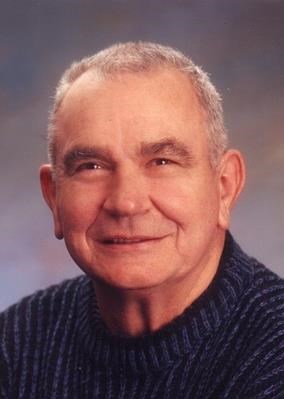 Ernie was born in Manitowoc on October 29, 1943 to Alvin and Olive (Worel) Boettcher. On September 4, 1965, he married Karen Bruckschen at St. John's Lutheran Church in Gibson. Ernie worked as a cheesemaker and later went on to own and operate Ernie's Laugh Inn in Larrabee for 21 years. In Ernie's later years he spent his time caring for residents at Harmony in Two Rivers, where he was very much loved.

Ernie enjoyed playing cards, gardening, feeding his birds, and most of all spending time with his family and friends. He never ran out of things to say.

He was preceded in death by his parents, Alvin and Olive Boettcher; a daughter, Deb Kuss; one son-in-law, Tom Melichar; his father-in-law, William Bruckschen; two sisters, and four brothers-in-law.

A private funeral service was held for the family at St. John's Lutheran Church, Gibson, with burial in the church cemetery. Online condolences may be sent to the family by visiting www.dejamartin.com.

The Lambert-Eckert Funeral Home of Mishicot assisted the Boettcher family with funeral arrangements.

The family would like to extend a special thank you to the staff of the Holy Family Critical Care Unit for their compassionate care given to Ernie and his family. Special thanks to Tamara for never leaving Ernie's side in his final hours as we could not be at his side with him.


Published by Manitowoc Herald Times Reporter from Apr. 27 to Apr. 29, 2020.
To plant trees in memory, please visit our Sympathy Store.
MEMORIAL EVENTS
To offer your sympathy during this difficult time, you can now have memorial trees planted in a National Forest in memory of your loved one.
Funeral services provided by:
Lambert Eckert Funeral Home
MAKE A DONATION
MEMORIES & CONDOLENCES
Sponsored by Lambert Eckert Funeral Home.
12 Entries
we sure had some good times in your bar, you will be missed , our sympathy to the family .

mike & jolene (mott) diedrich
mike diedrich
May 1, 2020
Sorry for your loss Karen
Neal Schneider
April 30, 2020
Our sympathy to Karen and the rest of the family. Ernie always had a special place in our hearts. His smile would always brighten the day.
Harold and Lorraine Krummel
April 30, 2020
Heaven just got a little better when Ernie walked through those Pearly Gates. What a dear man! He took care of my Mother at Harmony House and was always such a caring, kind, compassionate caregiver. My deepest sympathies go out to his family. God Bless Him!
Mary Reis
April 29, 2020
Our deepest sympathies to Karen, Pam, Jenny and the rest of Ernie's family. God truly blessed all who knew him. We'll never forget him or his special laugh.

Sara Pfefferkorn and Stephen Lesperance
April 29, 2020
Our sympathy to Karen, girls, and family. Ernie's Laugh In was the social center of Larrabee and Ernie was the joyful host. Time spent at Ernie's baseball diamond taught the children of Larabee respect, friendship, and sportsmanship. He has rounded all the bases and has hit that home run to Heaven!
GOD'S BLESSINGS from Eugene & Joyce Schubring.
Eugene & Joyce Schubring
April 29, 2020
My thoughts and prayers to the entire family. I spent many hours in Larabee playing ball behind the bar. Ernie always had a smile on his face and the world is a better place because of him.
Dave Schultz
April 28, 2020
Our deepest sympathies go out to all of Ernies family and friends. We didn't know him but we know this virus took a person in our community and we feel for you all. May you at some point find peace.
With heavy hearts
Jerry and Louise Strharsky
Louise & Jerry Strharsky
April 28, 2020
May God bless you and your family in this time of sorrow.
Janice Spaeth
April 28, 2020
Our deepest sympathy to Karen and the family. My dad and husband always enjoyed being with Ernie. Ernie's Laugh Inn was their special stop after a hard day at the mill in Larrabee. God's strength and love be with you at this time. We will miss that smiling face at the TR restaurant.

Sharon & Jim Wondrash
April 28, 2020
I am so sorry for the loss of Ernie, he was always so kind to me. He was a very special person in the family. I will keep you all in my prayers for strength and guidance.
Rachael Kagey
April 28, 2020
He was a model neighbor. I am devastated to know something like this happened to him. RIP