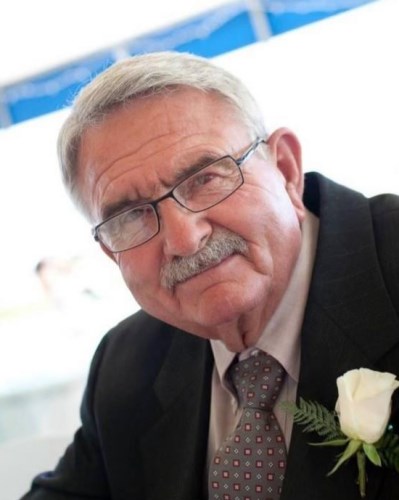 He enlisted in the Navy during the Korean war. He was a proud veteran and glad to have served his country. He served on the U.S.S. Thomas F. Nickel before being honorably discharged in 1956. They headed back to Wilder with two kids in tow, Barbara and David. Gayle was born in 1961.

He farmed in Wilder and loved being a farmer for 65 years. After he was finished farming, he worked for the Fish and Game Dept. at Old Fort Boise Park in Parma for 13 years, always loving the outdoors. Bob was also Golden Gate Highway Commissioner for 40 years. He dressed up as Santa Claus every Christmas Eve, bringing Candy canes for family and friends in the community for 40 years. He loved doing that every year. He loved family Birthday parties and always asked when the next one would be. He looked forward to the next family gathering and would ask every time if we were having strawberry shortcake, his favorite!

Bob enjoyed the time he spent with his son David and nephew Vernon showing them the ropes to become successful farmers. He was pretty excited to buy some property in New Meadows, Idaho to have a place for family snowmobiling, picnics, and fishing on Payette Lake. He had many great memories with his friends there.

They sold the farm and moved to Nampa 9 years ago. He was a devoted husband, father, grandfather, great grandfather, brother, uncle and cousin. He was a kind person and awesome father.

The family would like to thank the Hospice nurses and HomeWatch caregivers who were there when they were really needed. Special thanks to Molly and Nancy.

Memorials may be sent to the church in the Scholarship for Camp fund, or to a charity of your choice.

To plant trees in memory, please visit our Sympathy Store.
Published by Idaho Press Tribune from May 8 to May 9, 2021.
MEMORIAL EVENTS
May
10
Service
2:00p.m.
Mt. View Church of the Nazarene
26515 Ustick Rd, Wilder, Idaho
Funeral services provided by:
Flahiff Funeral Chapels
MAKE A DONATION
Please consider a donation as requested by the family.
MEMORIES & CONDOLENCES
Sponsored by Flahiff Funeral Chapels Caldwell Chapel.
0 Entries
Be the first to post a memory or condolences.