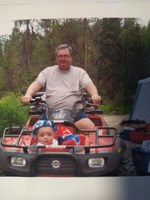 BORN
1948
DIED
2021
Harlend "Gene" Merrill
September 27, 1948 - February 4, 2021
Harlend "Gene" Merrill was born September 27, 1948 in Baker City, Oregon to Virgil and Jerry Morris. He and his brother Dean were adopted by Dr. Stewart and Nina Merrill of Boise, Idaho where he grew up attending Cole Elementary and Boise Elementary. He was a great athlete and always played on his brother's teams one grade up. He excelled in baseball, football, and basketball while at Gem State Academy and Grandview High School. He joined the Marine Corp with his friend David Owsley in 1966. Gene served two tours of duty in Viet Nam before returning home to marry his High School sweetheart, Margaret Laidlaw. Gene settled in the Boise area for several years before moving on to the Seattle area. When his friend Dennis Fish talked to him about the opportunity to move up to Alaska with his family, he jumped at the chance and moved to Eagle River. Gene worked for Carr's Grocery prior to going back to the Seattle area for a year. Upon his return Gene worked at Proctor's grocery for several years. When the Teamsters went on strike and made it difficult to get groceries into Alaska, Proctor opened up a terminal in Seward and shipped groceries in on the train. Gene became friends with Porter Jordon who went to work for Odom Corporation. Wasilla was the family's next move where Gene worked for the Odom Corporation as a driver for the Coca Cola distribution. He was a great salesman and his success led to a new facility being built in Wasilla to accommodate the increase in distribution volume. He even won the use of a sports car for a summer. On weekends during the summer you could find him with best friends Bob Roles and Porter Jordon running the wild Talkeetna River in their Water Walker river boats in search of the great Alaska King Salmon. Although Gene loved his fishing he loved to watch his boys play sports and this is where you would find him in the winter and spring months of the year as a very vocal supporter. Gene was instrumental in getting many community businesses as well as the VFW involved in supporting all the extra-curricular school activities in Wasilla. He was the Post Commander in 1988-1989. He enjoyed watching each one of his boys, whether swimming, hockey, baseball, or football. Gene moved to Fairbanks after his divorce and lived for another couple of years before heading back down to Idaho. Gene was in rough shape when he arrived in Boise and was lucky to meet Barbara Newby when we returned to his roots of the grocery business. From there a new journey began, a journey much like in Alaska that included fishing, camping, and teaching his soon to be stepdaughter Kelly how to hunt. Gene said Kelly was the daughter he always dreamed of and she was very instrumental in his care during the last years of his life. Gene became a long hauler for Willis-Shaw in 2000 and really enjoyed his time on the road. Barbara enjoyed flying out to wherever he was so they could drive home together. Gene and Barbara married in 2001. That is when Gene wanted to come off the road and stay home. His company eventually moved him into the instructor's job for the driving school because of his ability and knowledge. Gene retired in 2009. He spent his retirement camping and fishing, it did not matter if it was cold or raining, Gene and his grandson Dillion were always doing something. He was proud of his Boise State Bronco's and enjoyed talking about them with anyone willing to listen. Gene struggled after an accident on a four-wheeler, but managed until he was wheelchair bound. In 2018 Gene's health was taking a toll on him but that did not stop him from doing what he wanted to do. Gene and Barbara's home was always open to all, with great dinners, BBQ's, games and stories. Gene passed away February 4, 2021 and is preceded in death by his parents Dr. Stewart and Nina Merrill and his sister Carolyn Van Hess. He is survived by his wife Barbara, his brother Dean Merrill, sister Kathy Merrill and his children Michael, Stewart, Toby, Robert, stepchildren Leif, Kelly and many grandchildren. Gene was a son, a brother, a father, a grandfather and a great friend. He will be missed dearly and will be forever in our hearts. A Memorial Service will be held June 21, 2020 with more details to follow.

To plant trees in memory, please visit our Sympathy Store.
Published by Idaho Press Tribune on Mar. 2, 2021.
MEMORIAL EVENTS
No memorial events are currently scheduled.
To offer your sympathy during this difficult time, you can now have memorial trees planted in a National Forest in memory of your loved one.
GUEST BOOK
0 Entries
Be the first to post a memory or condolences.