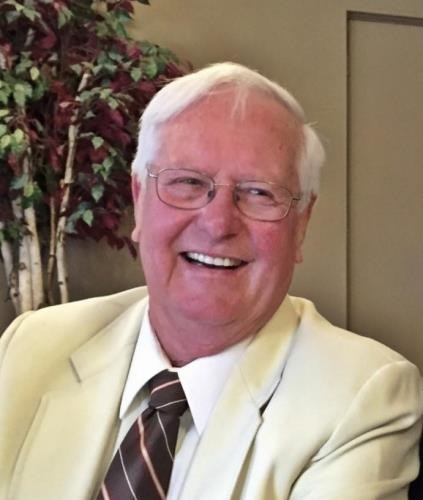 BORN
1938
DIED
December 11, 2019
Sherman L. Akers, 81, of Pocatello, passed away on December 11, 2019 surrounded by his family. He was born February 24, 1938 in Fort Hall, Idaho to William and Martha Francis Frasure Akers. Sherm grew up on the family farm in Fort Hall and attended Tyhee Elementary, Alameda Junior High, and graduated from Poky High in 1956. After high school, he attended the University of Idaho and Idaho State University and completed his degree in Business. He was a member of Phi Kappa Tau Fraternity. Sherm married Donna Gaved in 1958, and they recently celebrated their 61st wedding anniversary.

Sherm started his long, illustrious career in the electrical distribution industry with Electrical Contractors Supply in Pocatello. In 1980, he along with his wife Donna established D&S Electrical Supply Company. Throughout his career, Sherm was involved in numerous organizations and served on many boards including: The State Electrical Board, Director for the Idaho Foundation of Parks and Lands, National Association of Electrical Distributors(NAED), National Electrical Contractors Association (NECA), Bannock Development, US Bank, the Chamber of Commerce, The Elks BPOE 674 as the 6th Exalted Ruler, The Elks President for the State of Idaho, and The Elks Rehabilitation Hospital board of directors.

Sherm will be remembered for being an honest, well respected businessman with a very strong work ethic. He lived out the motto "play hard and work harder". He was a mentor to many friends, employees, and his family and always inspired them to achieve.

Sherm enjoyed exploring alternate routes without asking for directions, beautifying his property, and spending time at the casino. He had a love for his llamas and any critter that needed food or water. Above and beyond all of this, his family was first and foremost.

The family would like to extend their gratitude to the in home caregivers Esmerelda, Curria and Silvia who cared and shared through it all. A special thank you to Heritage Hospice and Cassie, Dr. LaVonne Mills and nurses Angela, Lanelle and CNA Whitney who helped to provide a peaceful passing. In lieu of flowers, the family would prefer donations be made in Sherm's memory to the Idaho Elks Rehabilitation Hospital P.O. Box 1100 Boise, Idaho 83701 where he served 20 plus years on the Board of Directors.

Private memorial graveside services for the immediate family will be held and a celebration of life will be announced at a later date. Please share memories, photographs and condolences at www.DownardFuneralHome.com

To plant trees in memory, please visit our Sympathy Store.
Published by Idaho State Journal from Dec. 13 to Dec. 15, 2019.
MEMORIAL EVENTS
No memorial events are currently scheduled.
To offer your sympathy during this difficult time, you can now have memorial trees planted in a National Forest in memory of your loved one.
Funeral services provided by:
Downard Funeral Home
GUEST BOOK
Sponsored by Downard Funeral Home.
8 Entries
So very sorry to hear about Sherm. He was the first boss I had and we remained friends. I would see him at the post office and he would smile and give me a hug. I haven't seen him for a year but will fondly remember him.
Brenda Hawk-Rommel
December 22, 2019
So sorry to hear of Sherm's passing. Prayers and thoughts for Donna and family. He was a good man.
Joe Campbell
December 18, 2019
My deepest condolences Donna
robert hynek
December 16, 2019
Donna and family,
Ted and I are so sorry to hear of Sherm's passing. Our thoughts, prayers and love to you and your family. Please know that our Father in heaven is taking excellent care of him now.
Warmest regards,
Ted and Wanda Yarbrough
Wanda Yarbrough
December 15, 2019
We were so sorry to hear of Sherm's passing. Our thoughts and prayers are with you at this difficult time.

Diana and Bill Olson
December 15, 2019
Sheri and I send our love and prayers to the wonderful Akers family. So many memories growing up in the Frasure/Akers clan, hope to share some with you all at Sherms memorial assuming we will be back in Poky from our winter home in Arizona. We will miss his big smile and welcoming heart.
Robert Frasure
December 15, 2019
We are so sorry to hear of Sherm's passing. May your great memories be shared during this difficult time.