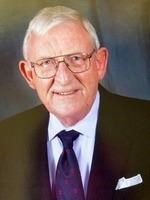 BORN
1930
DIED
2020
Colonel Chad B. White
November 26, 1930 - July 10, 2020
Chad Byrl White, 89, passed away on July 10, 2020, from complications of COVID-19.
Chad was born on November 26, 1930 to Mildred C. and Thomas Alan White in Twin Falls Idaho. He and his family moved to Boise, Idaho in 1938. After graduating from Boise High School in 1949, Chad went on to earn a Bachelor's degree from Idaho State University in 1953. At Idaho State University, Chad was an active member of the Intercollegiate Knights, a national service fraternity, and served as its National President. Chad was also active in the Reserve Officers Training program, and served as Commander of Cadets in his senior year.
After completing his studies, Chad married Anne "Georgie" Lucille Apperson, his college sweetheart, and began a very successful carrier as a US Army Officer. Chad's service was primarily in the field of military intelligence which took him to posts in Europe, Vietnam, and Korea, as well as the United States. He was also a graduate of the FBI Academy and The US Naval War College.
Chad retired, in 1984 as a Colonel, from a 33-year career with the Army. He and Georgie settled in Sierra Vista, Arizona over 30 years ago. Chad was predeceased by his wife, and is survived by his brother, Jack White, daughter Leslie Caplan (David), sons John White and Peter White (Marcie). He is also survived by his three granddaughters, Alexandra Caplan, Haley White, and Jada White. The family also thanks his girlfriend of many years, Linde, for her love and companionship.
Due to COVID-19, services will be held at a later date. Colonel White's family asks that you please wear a mask and be vigilant. Stay safe.
Published by Idaho Statesman on Sep. 23, 2020.
To plant trees in memory, please visit the Sympathy Store.
MEMORIAL EVENTS
To offer your sympathy during this difficult time, you can now have memorial trees planted in a National Forest in memory of your loved one.
MAKE A DONATION
MEMORIES & CONDOLENCES
Sponsored by The Idaho Statesman.
2 Entries
May his memory be a blessing. Love the Behrens Family
Marilyn Behrens
Friend
September 23, 2020
My condolences to the family . May you find comfort in your treasured memories
and Gods promise to return our loved ones . 1st Thessalonians 4 : 13 & 14 .
September 20, 2020
Showing 1 - 2 of 2 results