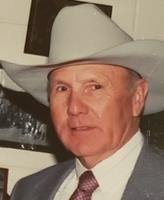 BORN
1930
DIED
2020
FUNERAL HOME
Alden-Waggoner Funeral Chapel
5400 W. Fairview Avenue
Boise, ID
David B. Ellis
August 31, 1930 - December 3, 2020
Middleton, Idaho - David B Ellis went to be with the Lord on December 3, 2020. He passed after a brief illness at his home in Middleton, Idaho with his daughter Kristi Jo, and her husband Steve by his side. David was born in Eagle, Idaho on August 31, 1930. David and his family lived in the Boise Valley his entire life.
In his early years David and his family were extremely hard working. Up before sun rise, hitching horses to the wagons. Saddling horses to ride the corrals and gather livestock, milking cows, feeding chickens and buying and selling rabbits, dogs, cows and horses. In his younger years David worked with his father building Barber Dam, clearing the ground for Boise Airport and Ann Morrison Park.
David attended school in Boise where he met his first wife Joyce. They had two children Michael and Kristi Jo. David worked in the local grocery stores stocking shelves and then cutting beef as the store butcher. He started working for Boise Valley Packing Company. He rose to the top and soon became part owner. His knowledge of cattle, local distribution requirements, the meat cutting industry and his work ethic made him a perfect fit. David loved riding and raising horses. David raised and trained numerous Registered Quarter Horses purely out of his love for horses. He was a highly respected horseman with many National Championship Cutting Horse trophies through the years, all on Quarter horses he raised and trained himself. His love of animals continued through the family with his son Michael. They trained Idaho Champion Black Lab Retrievers as well as many cow dogs that worked beside him on a daily basis. Years later David's brother Doran was hired on at Boise Valley Packing Company. Eventually Doran too became a part owner. Before it was over, the two of them owned the plant outright. They closed the business down in 1990, and sold the ground on Eagle road just south of the bypass on the west side of the highway. When David would travel it included hunting/fishing trips to the Idaho back country wilderness. Traveling halfway across the nation to attend cutting competitions and, even a few times to Alaska to visit family and of course fishing.
David and Carolyn married in 1983. They were devoted to each other, and their love of family, God and the country life. David and Carolyn both raised, trained and sold horses during their retirement years. They could be seen riding horses in the foothills above Boise, and on many occasions even riding in the Eagle Fun Day Parade. They served hotdogs around the fire at their home in Eagle where all were welcome. Carolyn passed in 2010, They were a great couple.
David took great pride being a man true to his word, his work ethic, and how he presented himself. His pants, shirt and handkerchief were always clean and pressed, and his cowboy boots and hat were always impeccably prepared for the occasion. But most of all, he was a steadfast Christian in how he lived his life.
He was preceded in death by his sister Ruby, father Walter, mother Mary, his son Michael, older brother Doran and grandson Cody Hammons. He was also preceded in death by two wonderful women his first wife Joyce and his soul mate Carolyn. David leaves behind his older sisters Olive Taylor and Bertha Carpenter, younger brother Jack, daughter Kristi Jo Hammons and her husband Steve, granddaughter Melisa Hammons, great grandchildren Zachary Blackwell-Hammons, Nicole Hanson, Tyler Hanson, grandson Raymond Ellis and his wife Lindsey, great grandchildren Austin and Cami, all of the Boise Valley and Ben Slaughter son of Cody Hammons of Utah as well as Carolyn's children Rick Payne and his two sons Jake and Nick, and Bret Payne all of the Boise Valley and his daughter Mikayla (Payne) Taugher and her husband Travis of Montana.

Published by Idaho Statesman on Jan. 17, 2021.
To plant trees in memory, please visit our Sympathy Store.
MEMORIAL EVENTS
To offer your sympathy during this difficult time, you can now have memorial trees planted in a National Forest in memory of your loved one.
Funeral services provided by:
Alden-Waggoner Funeral Chapel
MAKE A DONATION
MEMORIES & CONDOLENCES
Sponsored by The Idaho Statesman.
0 Entries
Be the first to post a memory or condolences.