Sandra Mivelaz, administrator of the H.R. Giger museum in Gruyeres, western Switzerland, told The Associated Press that Giger died in a hospital on Monday.

"My paintings seem to make the strongest impression on people who are, well, who are crazy," Giger said in a 1979 interview with Starlog magazine. "If they like my work they are creative ... or they are crazy."

Born Hans Ruedi Giger on Feb. 5, 1940, in the southeastern Swiss town of Chur, he trained as an industrial designer because his father insisted that he learn a proper trade.

His mother Melli, to whom he showed a lifelong devotion, encouraged her son's passion for art, despite his unconventional obsession with death and sex that found little appreciation in 1960s rural Switzerland. The host of one of his early exhibitions was reportedly forced to wipe the spit of disgusted neighbors off the gallery windows every morning.

A collection of his early work, "Ein Fressen fuer den Psychiater" - "A Feast for the Psychiatrist" - used mainly ink and oil, but Giger soon discovered the airbrush and pioneered his own freehand technique. He also created sculptures, preferably using metal, styorofoam and plastic.

Giger's vision of a human skull encased in a machine appeared on the cover of "Brain Salad Surgery," a 1973 album by the rock band Emerson, Lake and Palmer. Along with his design for Debbie Harry's solo album, "Koo Koo" (1981), it featured in a 1991 Rolling Stone magazine list of the top 100 album covers of all time.

Giger went on to work as a s et designer for Hollywood, contributing to "Species," ''Poltergeist II," ''Dune," and most famously "Alien," for which he received a 1979 Academy Award for special effects. Frequently frustrated by the Hollywood production process, Giger eventually disowned much of the work that was attributed to him on screen.

The image of a brooding, mysterious artist was nurtured by Giger working only at night, keeping his curtains permanently drawn and dressing mainly in black - a habit he acquired while working as a draftsman because it made Indian ink stains stand out less on his clothes.

While his work was commercially successful, critics derided it as morbid kitsch. His designs were exhibited more frequently in "Alien" theme bars, short-lived Giger museums and at tattoo conventions than in established art galleries.

In 1998, Giger acquired the Chateau St. Germain in Gruyeres and established the H.R. Giger Museum.

Giger was pleased that his idea of machines with human skin became a popular motif in body art.

"The greatest compliment is when people get tattooed with my work, whether it's done well or not," he told Seconds magazine in 1994. "To wear something like that your whole life is the largest compliment someone can pay to you as an artist."

Details on survivors and funeral plans were not immediately available.

David Rising contributed to this report.


Copyright © 2014 The Associated Press. All rights reserved. This material may not be published, broadcast, rewritten, or redistributed.
Published by Idaho Statesman on May 13, 2014.
MEMORIAL EVENTS
MAKE A DONATION
MEMORIES & CONDOLENCES
43 Entries
God is a God of all Comfort and he will Comfort the family's..My heartfelt condolences to the family's...
May 11, 2020

"Much on earth is concealed from us, but in place of it we have been granted a secret, mysterious sense of our living bond with the other world, with the higher heavenly world, and the roots of our thoughts and feelings are not here but in other worlds. That is why philosophers say it is impossible on earth to conceive the essence of things. God took seeds from other worlds and sowed them on this earth, and raised up his garden; and everything that could sprout sprouted, but it lives and grows only through its sense of being in touch with other mysterious worlds ...
Fyodor Dostoyevsky
("The Brothers Karamazov")
Robert Ackerman
May 26, 2017
Godspeed, and thank you for sharing a part of your life with us.
Harry Simpson
May 12, 2017
Valenda Newell
November 23, 2016
mr hr giger, with others, sure did make some interesting stuff. a lot of it. he inspired a spectrum of conversation and social engagement. such will most likely continue here and there in the world. as for his passing away, condolences to his wife and loved ones.
susan whitmore
June 28, 2014
I was browsing the net and thought I would look at some Giger sites, and lo and behold he has passes away. He was a one-off who shared his love of the world throught his art with everybody on the planet. It makes me feel like sitting down and having a good cry, life is so unfair sometimes. SO SO SAD.
michael davison
June 14, 2014
Idol forever. Forgotten, never.
Joseph Wagner
June 12, 2014
Let's bow to sheer artistry...
Bariel IMPERATOR
June 3, 2014
I'm sorry for your loss.
Julius Allen
May 29, 2014
So sorry to hear about the loss of a very talent man. God's word promises us everlasting life. (John 17:3).
L T
May 21, 2014
Mr.H.R.Giger-may you rest in peace and know that your genius,influence,and gifts to the world will live eternally.
Joe Nunez
May 17, 2014
May your hearts soon be filled with wonderful memories of joyful times together as you celebrate a life well lived.
May 17, 2014
My deepest condolences on your loss. Please know you are not alone in you grief, God knows how you feel and he wants you to throw your burden on him because he cares for you.
JPW
May 17, 2014
Gigler Family, we send our deepest sympathy during this time. Once said, "We are all on the same train in life, but those who have fallen asleep in death are awaiting to hear God's voice so they can wake up." They will wake up to a new world where they won't be sick or grow old.
Tina
May 17, 2014
LIKE A MAN WHOM HIS OWN MOTHER KEEPS COMFORTING, SO I MYSELF SHALL KEEP COMFORTING YOU PEOPLE.ISA.66:13..MAY OUR HEAVNLY FATHER BE YOUR ARM.....N.C.
May 17, 2014
In Gods' care rest in peace
Dwayne Bickham
May 16, 2014
He was a talented artist. Please accept my sympathy for your loss. May God grant the family strength that Only He can provides to deal with your sorrow,
Florida
May 16, 2014
W Maguire
May 15, 2014
I am so sorry for the loss of your loved one. Please find peace and comfort in Psalms 65:2.
May 14, 2014
My condolences to the family and friends of Mr. Giger. God invites you to "Draw close to Him and He will draw close to you (James 4:8) and help you through this time of sorrow.
May 14, 2014
rip
michelle plakas-kaiser
May 14, 2014
May the God of all comfort 2Cor.1:3 comfort,strength the family during this time of sorrow.Those who die God keep in his memory because they are precious in his eyes." psalm 116:5
A servant of God
May 14, 2014
So sorry for your loss. May the God of comfort provide you with much comfort during this difficult time.
H Taylor
May 14, 2014
To the Ginger family, I am so sorry for your loss. To be able to design is an art that shows love. As our creator so did when he designed and created the earth and all that exist on it. Mr.Ginger fortunately receive acclaim notarity and fame for his design and no one questions that he design the characters in "alien"
teresa
May 14, 2014
You made all your fans look at the world differently a glimpse inside your wonderful imagination. rip
steve p
May 14, 2014
May God bless you and your family in this time of sorrow.
May 14, 2014
My condolences to the family. May God supply you strength and comfort to help you with your loss now and those difficult days that follows. He will soon fulfill all his promises found in his word including bringing back those who have fallen asleep in death back to their youthful vigor.

(Job 33:25) Let his flesh become fresher than in youth; Let him return to the days of his youthful vigor.'
Jeannie
May 13, 2014
"And he will wipe out every tear from their eyes and death will be no more, neither mourning nor outcry nor pain be any more. The former things have passed away."
May 13, 2014
I am truly sorry for the loss if your love one.
G Alexander
May 13, 2014
Todd Jones
May 13, 2014
My inspiration, u resonate so vividly in my life. There's no one ever to take ur place or understand the visions only u could craft. I wish u well on ur journey. I pray u will sculpt the streets for me to walk in heaven and fathom the day we finally will meet! Ur more beautiful then any other I've known. RIP my beautiful dreamer, H.R. Giger
becca blunt
May 13, 2014
Thank you so much for the great work! RIP
Greg Peters
May 13, 2014 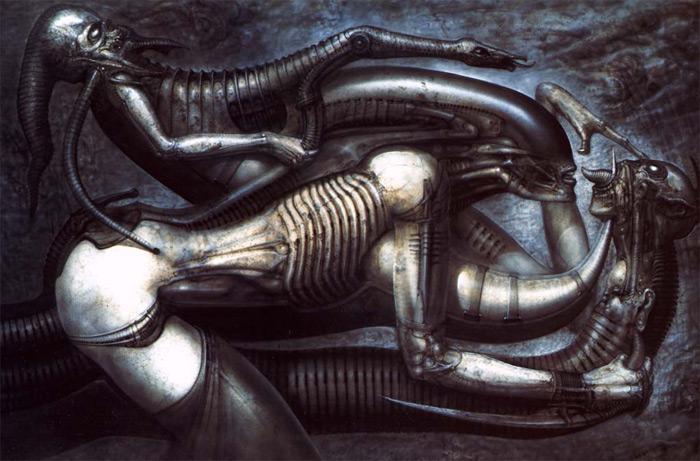