Joseph Larkin
Joseph Larkin Feb. 24, 2009 Joseph Lindberg Larkin, "Lindy", was born in 1928, the year of Lindberg's transoceanic flight. In 1930 the Larkin family left Colorado and headed to Idaho, buying an acreage near Donnelly. In 1946 Lindy enlisted and was sent to Japan. Returning stateside, he entered U of I with the intention of instilling the love of physics and math (and building model planes) in his future students. In 1951 he married Natalia Brown. They lived at a mercury mine at Cinnabar that year. Their first son, Ross, was born at nearby Stibnite. Returning to U of I, Lindy received his B.S. degree and began teaching at Elk River, Idaho, while earning a master's degree and building a house. Two more "Sonny-boys" enlarged the family. The U.S. countered Russian Sputnik with a year of advanced study for science teachers; Lindy went to U of Utah. The following summer the Dept. of Defense offered him a position in its overseas school in Zaragoza, Spain. The Larkins went for a year but stayed for thirty in the DODDS schools. (Lindy changed his name to Joe). In Spain, the family (and three more boys) lived in Zaragoza, Madrid, and Seville. They bought property on Cascade Lake, Idaho. Then to Frankfurt and Kaiserslautern, Germany. There he received his doctorate from USC. They moved briefly to Tachikawa, Japan, and then to Okinawa, where Joe built an ocean-worthy boat, cheerfully (sometimes) aided by his sons. After only a few outings in the Centauri, Joe was offered the DODDS directorship of the Atlantic Region, which required a moved to London, England in 1980. The Atlantic Region comprises a number of schools around the Atlantic coast from Belgium to Guantanamo. Joe gave a deep sigh and sold his boat. In 1988, Joe retired and the family returned to their place on Cascade Lake. Now he had space and time for more projects. Starting with a Gold Wing motorcycle, he built an enclosed three-wheeler (somewhat like a Messerschmitt car he once restored). He built model float planes. He wrote Roosevelt's Tree Army about the CCCs, and articles for the Valley County History Project. He led a remarkable life. He was kind and generous man, a man who was good with words, who enjoyed his family, who loved to figure things out and who loved to build things. He leaves his wife, Natalia, six sons and their wives and two grandchildren. Also his brother, "Rusty" Larkin and wife Joy, two sisters-in-law, and friends world-wide. His ashes will be interred at Meadows Valley cemetery. A memorial gathering will be held at a later date. Donations can be made to Friends of Four Rivers Hospice, 415 N. Curtis Ave., Boise, ID 83702
Published by Idaho Statesman on Mar. 14, 2009.
To plant trees in memory, please visit the Sympathy Store.
MEMORIAL EVENTS
To offer your sympathy during this difficult time, you can now have memorial trees planted in a National Forest in memory of your loved one.
MAKE A DONATION
MEMORIES & CONDOLENCES
12 Entries
I was so saddened to read of Mr. Larkin's passing. My sincerest condolences to his family and friends. Mr. Larkin will always hold a special place in my heart and has been in many family stories told thru the years. You see I met my husband Mel at FAHS in 1968 and up thru his graduation in 1970 we were inseparable at school every chance we had.I lost count of how many times Mr.Larkin had to "knock" on the roof of Mel's little blue V.W. bug to remind us that kissing was not for school. Mr. Larkin seemed to know it was true young love, because he never lost respect for us. Well as soon as I graduated in 1972 stateside, and was 18 on a Monday ,we were married that Friday, and celebrated 33 anniversary's until I lost Mel In June of 2005. FAHS holds many wonderful memories me.
Diane Rinehart-Millmaker-Myers
July 31, 2009
My sincere condolences to the family of “Mr. Larkin”, our Principal at Frankfurt High School, Germany. A strict but fair administrator for the Military Brats that were under his watchful eye during those turbulent years gone by. Now that we are mature and wiser, we admit that men of those caliber are few and far between.
Ray Pollard, Class of 1970
Ray Pollard
April 17, 2009
I put some picture of Dad online here - http://donutboat.wordpress.com/2009/04/10/dad-pictures/.

Here's an article about the boat he built in Okinawa: http://donutboat.wordpress.com/2009/04/10/centauri/
Tom
April 10, 2009
We extend our heartfelt sympathy to all the Larkin family. We have fond memories of Joe, our friend and colleague, especially during our time together in Germany and our summer at the USC campus in LA.
Richard and LaRae Rhoads
April 3, 2009
Our thoughts and prayers come to you across the miles. Mr. Larkin was a wonderful Principle during my years and Frankfurt American High School. Class of 1971. He will always remain close to us in our hearts. God Bless
Maria Montemorra-Sheldon
March 31, 2009
Our heartfelt condolences to you and the family, Tally! We both have wonderful memories of working with Joe in Germany and feel very fortunate to have known him. Such a multi-faceted man! We need more like him. RIP, Joe!
Joan Maas Don Devona
March 31, 2009
Please accept our most sincere regrets.
David and Vidabeth Bensen

Pittsboro, North Carolina
March 31, 2009
We were sorry to hear of Joe's passing. He was a good man with a sharp mind and an enormous heart. He will be missed.
Robert Calzini
March 28, 2009
I will always have wonderful memories of the Blue House and "Mr.Larkin" trying to herd an unwieldy group of us,(college age friends of the kids) to do some project on the house, while so many other exciting things called-waterskiing, sailing, fireworks,flying model airplanes, McCall... I am so happy to have met Joe and Tally.
Carolyn Young
March 27, 2009
Joe Larkin was one of the finest people I ever met. I lack the correct words to articulate my thoughts of this unforgettable man. I am certain that anyone who knew him shares a similar appreciation. I am honored to have known him.
Marty Prager
March 24, 2009 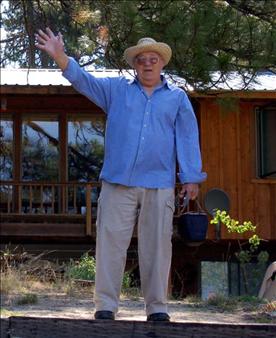 I am so saddened to hear of Lindy's passing and blessed to have enjoyed a visit both at my Godmother, Cecelia's Larkin House and at lunch in Donnelly a couple of years ago.

The Larkin Family members were dear to our hearts, especially to my Mother, Hope Passi. She is gone also, since 1993, but her spirit remains strong and on her bealf and my own I offer the sincerest condolences and sympathy for your loss.

Natalia and my Godfather, Roscoe, especially,it would be wonderful to see you again. Perhaps we can make that happen in Long Valley in June.