FUNERAL HOME
Summers Funeral Home
1205 West Bannock Street
Boise, ID
Stephanee Jane Rowbury June 22, 1967 - Dec. 27, 2011 Stephanee Jane Rowbury, an event coordinator, who dazzled people with her charm, died on December 27, 2011 in Boise, Idaho with family and friends at her side. She was born in Boise, Idaho on June 22, 1967 to Nora Ward Beer and L. Joe Rowbury. Stephanee battled breast cancer since 2008. In addition to Boise, Stephanee had roots in Buck Hill Falls, Pennsylvania, Austin, Texas and San Diego, California where she developed deep and very rich relationships with all those she touched and grew to know. Stephanee had a unique gift to milk every ounce of happiness out of each and every moment and those who lived in those communities will forever remember her uncanny ability to always be happy and to live life to the fullest, even in the face of a very tough and painful battle with cancer. Stephanee is survived by her parents, her step-father, Stephen L. Beer, her sisters, Kimberly Lin Kenny (Jeff), Jennifer Jo Miller (Terry), and Jennifer Anne Beer O'Keefe (Jason), her brothers, Ryan Rowbury (Kacie) and Christopher Neff. She loved children of all ages and is survived by her nieces, Tyler Kenny, Josie Rowbury, and Addison O'Keefe and her nephews, William Kenny, Maxwell Kenny, Brody Rowbury, Benjamin Stephen Hines, and Parker Michael O'Keefe. Her maternal grandfather ,B.L."Sonny" Ward, several aunts and uncles also survived her as well as her special friend, John Grapperhaus, who gave her hope when little was to be had. Stephanee was preceded in death by her maternal grandmother, Betty Ward, and her paternal grandparents, Sherwin and Kathryn Rowbury, and her brother, Matthew Stephen Beer. Special thanks to her "Core" group, Dalynn Appleton, Kristin Myers, Sarah Fendley, Celena Jones, Mitzi Briggs, Chelsey Adams, Jennifer Jo Miller and her Uncle Joe Ward, who cared for her during her final fight. Jill Winschell and Dr. William Kreisle of MSTI provided excellent care to Stephanee and her family. Donations to St Luke's Pediatric Oncology Foundation would be a nice way to remember Stephanee. A viewing will be held on Friday, December 30, at Summers Funeral Home (1205 W. Bannock), between 5:00 p.m. and 7:00 p.m. A Memorial Mass will be held on Saturday, December 31, at 11:00 a.m. at St. John's Catholic Cathedral, with a celebration of her life to occur at the Stagecoach after the service.

Published by Idaho Statesman on Dec. 30, 2011.
To plant trees in memory, please visit the Sympathy Store.
MEMORIAL EVENTS
To offer your sympathy during this difficult time, you can now have memorial trees planted in a National Forest in memory of your loved one.
Funeral services provided by:
Summers Funeral Home
MAKE A DONATION
MEMORIES & CONDOLENCES
Sponsored by the World that she touched and loved her back.
19 Entries
She was such a sweetheart Miss her smile
Patricia Ransom
Acquaintance
January 13, 2021
She was such a ray of sunshine. Too young to be taken away.
Trish Ransom
December 24, 2019 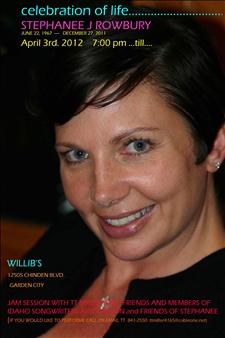 In my 70+ years I have lost many friend and family to all kinds of tragedy and natural passing. None has touched me so deeply. None is missed so dearly. None with such a profound far reaching, long lasting pain. Where you once lived there is now a quiet energy. One of your mothers butterflies, released into the universe for all to share.
Terry Miller
March 22, 2012
Nora, Steve and family, We are so very sorry for your loss. You are in our thoughts and prayers.
Terry & Nancy Coffin
January 10, 2012
I miss you baby. You were such a bright light that never ever dimmed no matter the adversity. Xxx
John G
January 8, 2012
I only knew Stephanee through our mutual friend, John Grapperhaus. But I could see through him what an amazing woman she was and how much she touched the lives of so many people. I will always remember the brief time we had together sipping wine on the shores of Tomales Bay. Rest in peace, beautiful Stephanee.
Leslie Araiza-Lorenzo
January 2, 2012
The precious moments shared with you and John were too few, but your impression is indelible. Thank you for your kindness and light.
David Shutt
January 2, 2012
Miss Stephanee was my "girlie girl"... Spending time on our deck drinking wine and eating cheese. Dwight and I so enjoyed her laughter and her amazing outlook on life. She was a beauty and will always have a place in our hearts. God Speed Miss Stephanee. You are the newest angel in the heavens and a beautiful one at that. You will be missed.
Lil and Dwight Kurek
January 1, 2012
I only knew Stephanee because I delivered her mail and she made an empression on me. She was truely a beautiful person.
Trish
December 31, 2011
Live life generously and with grace is what I have learned from Steph,...I hate that cancer took you away from us. You fought a good fight. I will miss you chica. Maria Hogan New Zealand
Maria Hogan
December 31, 2011
Stephanee, one word could describe you. Light. You came into my life on a dark day (and decided we should skip school the rest of the day to resolve my problem and get to know each other..great idea! 1983). Since then you have been shining your brilliant light onto all of us..and you linger and glow. Many years ago you made a profound impact on me and helped me become who I am. Part of you is with me always. You were a gift from God. And now He calls you home. Until we meet again, my love to you Nephee, and to your family and friends who are missing you too. Thanks for being such a vivacious splash of light in my life. Love and Light...
Deana Ashton
December 31, 2011
The first time I met Stephanee, I remember thinking...I hope that the impression she has on me, is how I might make an impression on others. Classy, beautiful, confident and so approachable. And a smile that could melt anyone. God always knows. He knew that we would all be better for having you touch our lives -- if even for a moment and He knew that your light was needed elsewhere. We don't understand, but He knows. May your strength, grace and peace watch over us all.
Lisa Araiza-Penfold
December 30, 2011
Stephanee, you provided me with so much joy and laughter and yet also taught me so much about one should truly Live their Life. I knew you so briefly and yet you made such a huge impact in my life. How did you get so wise at so young an age?. . . and why must such an incredible gift to Humanity be taken from all of us and such a young age, as well? I love you and and always will.
John Grapperhaus
December 30, 2011
May Stephanee's light and joy for life remain in our hearts forever.
Nancy Benson
December 30, 2011
It was a joy for me to be able to call Stephanee my friend. Such a beautiful, sweet and courageous woman, I miss her and will cherish my memories of time spent with her. Love and strength to her family and friends. You are in my thoughts and prayers.
Nancy Benson
December 30, 2011
Stephanee was an Angel and loved so much. Her smile and laughter
was a blessing to all who were around her. She will be missed.
Love Ilene Maddux
December 30, 2011
I am so greatful to have had a friendship with such a beautiful girl, inside and out! One of the best times of my life was when we were roommates! I am so saddened by her death. Love to her family,Nora and Stephen, Joe, Kim and Jennifer. You are in my thoughts and prayers!! XOXO
Jamie/John (Dickey)-Cunningham
December 30, 2011
We will miss her smile and zest! God bless everyone that gave her love and hope. Our hearts are saddened but we are better people for knowing her. She gave us all a gift with her presence. Our thoughts and prayers are with her family and friends during this difficult time.
With love and fond remembrance,
Dave and Lisa O'Connor
Lisa O'Connor
December 30, 2011
Tami Dickey-Thompson
December 30, 2011
Showing 1 - 19 of 19 results