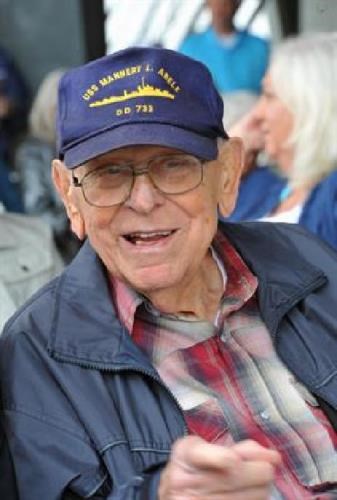 Born in Clover, SC, he was the son of the late Clyde Clifton Chambers, Sr. and the late Estelle Stewart Chambers. He proudly served his country in the United States Navy as a Radarman aboard the USS Abele during World War II in the Pacific Theatre. He retired from the Louis P. Batson Company in Greenville, SC. He was a faithful member of Eureka Baptist Church where he served as Deacon and Sunday School Teacher as well as on numerous other committees.

The family will be at their respective homes and will receive friends at the church on Friday prior to the service, from 1:00 p.m. until 2:30 p.m.

A message of condolence may be sent by visiting www.mcdougaldfuneralhome.com. The McDougald Funeral Home and Cremation Services, Anderson, SC

Published by Anderson Independent-Mail from Jan. 5 to Jan. 6, 2017.
To plant trees in memory, please visit the Sympathy Store.
MEMORIAL EVENTS
Jan
6
Visitation
1:00p.m. - 2:30p.m.
Eureka Baptist Church
SC
Jan
6
Funeral service
3:00p.m.
Eureka Baptist Church
SC
Funeral services provided by:
The McDougald Funeral Home
MAKE A DONATION
MEMORIES & CONDOLENCES
Sponsored by The McDougald Funeral Home.
8 Entries
I did not know Mr Chambers, but I recently found out that he was a shipmate of my great grandfather's on the USS Mannert L Abele 1944-1945. My Grampy, Maurice "Rocky" Lefebvre, passed in 1984. I just want to say thank you for your service, and as a Charleston area native I wish we would have been able to meet in person. RIP, say hi to my Grampy for me! To the family of Mr Chambers I am sorry for your loss, he is a true American hero.
Christina Williams
July 3, 2018
I didn't know Mr. Chambers or his family but I want to say I appreciate his service for our country. RIP Mr. chambers.
Vickie M. wiliams
January 6, 2017
Sorry for your loss may you draw comfort from Gods word at Hosea 13:14 Sincerely. L Ohio
January 6, 2017
Will be thinking of the family as Gordon was one of the finest men I have ever known.
Bobby Giles
January 5, 2017
So sorry to hear of your dad's passing. He is just beginning to live now. The family will be in my prayers.
Druanne West
January 5, 2017
So sorry to here about Mr. Chambers he was a good man we will be praying for the family that you might find peace and treasure your memories.
Ron & Margaret McClellan
January 5, 2017
Our thoughts and prayers go out to the children and family of Gordon Chambers. We have had the pleasure of knowing Gordon over the last several years. Talked with him several hours while visiting in his home. Loved him telling me about his experiences in World War 2. He was like a father to me. He was a good Christian man and a wonderful husband to my sister Angie. You will be missed. Rest in peace brother. Wilma and I love you.
Chuck & Wilma Humphries
January 5, 2017
Chuck & Wilma Humphries
January 5, 2017
Showing 1 - 8 of 8 results