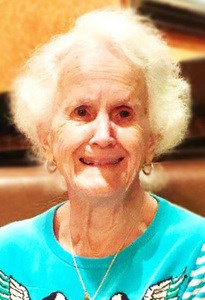 Born in Lynch, Ky., Feb. 20, 1934, she attended local Harlan County Schools and graduated in 1952 from Cumberland High School in Cumberland, Ky. Soon after graduation, Bobbye joined the U.S. Air Force, and while assigned to Pope Air Force Base in Ft. Bragg, she met and married another Air Force service member, Billy J. Blevins, Aug. 1, 1953. Bobbye completed her Air Force service in 1954, and together they raised four children, while her husband continued serving in the Air Force.

Bobbye and Bill frequently relocated to duty stations stateside and overseas. She raised four children on her own for weeks or months at a time when Bill deployed on remote military assignments. Air Force duty assignments where the family relocated included Bedford, Va.; Arlington, Va.; Cape Canaveral, Fla.; Alcoy, Spain; Kirkland Lake, Ontario, Canada; Oak Ridge, Tenn.; Gettysburg, S.D.; and Homestead, Fla. Upon her husband's military retirement in 1968 at Homestead Air Force Base, Fla., she worked for a number of years for Southern Bell Telephone. In 1977, the family relocated to Marion, Va., and then to Saltville, Va. In the early 1990s, Bobbye and Bill moved to Kannapolis, where they lived until 2017.

Bobbye was an avid gardener, reader and staunch supporter of her children, grandchildren, and great-grandchildren, often giving of her time and energy to help whomever and whenever she could. She loved animals, especially hummingbirds and owls. She was a great cook and loved teaching the grandchildren how to prepare some of her favorite meals.

A graveside service with military honor guard will be held at 2 p.m., Saturday, Dec. 10, at the Salisbury National Cemetery in Salisbury.

In lieu of flowers, donations may be made to the American Cancer Society in her memory.

The family would especially like to thank the Virginia Veterans Care Center for the thoughtful care and support they provided.

To plant trees in memory, please visit our Sympathy Store.
Published by Concord & Kannapolis Independent Tribune on Nov. 15, 2020.
MEMORIAL EVENTS
No memorial events are currently scheduled.
To offer your sympathy during this difficult time, you can now have memorial trees planted in a National Forest in memory of your loved one.
Funeral services provided by:
Simpson Funeral Home
GUEST BOOK
2 Entries
Sending my deepest condolences and prayers.
Shelby Melvin
November 15, 2020
What an amazing women she was in the years I got to know her at the VVCC. She would bring a smile to anyone's face when we came around. She so enjoyed having her hair done and getting all dolled up. I know she was so loved by her children and that she really enjoyed the care she got from you all. She would talk about her you all often. I loved to just sit with her and Billy when they were together and listen to them at Breakfast some days. They were just the cutest couple. God Bless and May you all have peace knowing she is at the thrown of God now with her beloved Billy. Many thoughts and Prayers . Joyce Ballinger VVCC Business Office
Joyce Ballinger
November 15, 2020