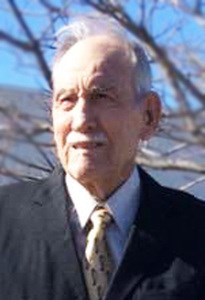 Mr. Barr was born Dec. 4, 1927, in Kannapolis. He was a son of the late Andrew Jasper Barr and Minnie Estelle Lail Barr. He was a veteran of the U.S. Army and proud member of the Cabarrus County Leaf Patrol. David cherished his leaves, his military service and his dog, Ladybug.

In addition to his parents, he was preceded in death by his wife, Eloise White Barr; son, Steven Barr; and three sisters, Betty, Ruth, and Evelyn.

To plant trees in memory, please visit our Sympathy Store.
Published by Concord & Kannapolis Independent Tribune on Nov. 11, 2020.
MEMORIAL EVENTS
Nov
10
Graveside service
Kannapolis Cemetery
Funeral services provided by:
Lady's Funeral Home
GUEST BOOK
3 Entries
Prayer and thoughts with the family.Dave a person he loved playing his guitar and singing,entertaining,friends,such a joy to be around and listen to his music.Will never be forgotten. will be Missed .
Gwen Mcgee&Garland Briggs
November 29, 2020
Something comical I forgot to mention, my girls are 34 and 37 years old but when they were younger and went roller skating as we all did, they came home one night telling me how these 2 older men were there skating and how good they could skate, I went in to get them one day to find it was my own uncles. (So cute) I had no idea that it might have been them.
Anita
November 11, 2020
So sorry for your loss, if there´s anything I can do for you please let me know.
Anita Linker (niece)
November 11, 2020