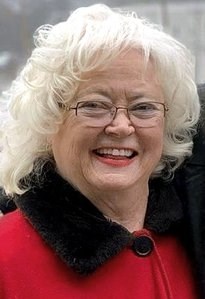 Dell Elizabeth Graham was born in the small town of Todd in Ashe County. She has always affectionately been known as Betsy. Her parents were William Reece Graham Jr. and Laura Louise Oliver Graham.

Betsy is survived by two brothers, Charles Graham and wife, Elaine, and Reece Graham and wife, Judy, both of West Jefferson. Betsy is also survived by her three sons, Christian Graham Covington and wife, Angi, of Todd, Matthew Patterson Covington and wife, Stacey, of Concord and Charles William Reece Graham of Concord. She took great joy in her nine grandchildren and one great-grandchild, Sunshine and husband, Kyle, Christian and wife, Kerstin, Forrest, Summer, Honor, Hunter, Promise, Merritt, Jade and Violette.

Growing up in the mountains of Western North Carolina, Betsy was exposed to beautiful authentic mountain ballads and spiritual music which she loved to sing. Later, she would also learn classical music at nearby Appalachian State University. Betsy was considered a very fine mezzo soprano and many people who heard her golden voice would be brought to tears. She would often sing at religious services, on the performing stage and in her later years treasured opportunities to sing at nursing facilities and other venues where her songs brought hope and comfort for those in need. Miss Betsy was an expert in family genealogy and history and was very proud of the fact that her grandfather Graham was the first medical doctor with a full medical degree in Ashe County, and her grandmother, Della Oliver, was renowned for her supreme alto voice. Her first jobs were working at the old townhouse restaurant and Tweetsie Railroad. At Tweetsie, she sang and danced, she often sang with Fred Kirby who was a country and Western recording and performance artist. Betsy also recorded several albums of much loved Christian music.

Among Betsy's accomplishments, she was crowned Miss Ashe County in 1965. In 1974, she was selected as the young woman of the year from the business and professional women's association of Concord/Cabarrus County. However Betsy always considered her greatest pleasure to be sharing God's love and grace with all she knew. She was a Godly, loving, impulsively generous songbird who always tried in her own way to do the right thing. She is already greatly missed.

Funeral services for Betsy will be conducted Saturday, Sept. 25, at 2 p.m., on the family farm located at 9260 Three Top Rd. in Todd. Burial will follow in the Graham Family Cemetery in Todd. Friends may visit and sign the register book at Austin & Barnes Funeral Home, Friday, Sept. 24, from 12 to 5 p.m.

Condolences may be shared with the Graham family at www.austinandbarnesfuneralhome.com.

Austin & Barnes Funeral Home and Crematory of Boone is serving the Graham family.
Published by Concord & Kannapolis Independent Tribune on Sep. 24, 2021.
To plant trees in memory, please visit the Sympathy Store.
MEMORIAL EVENTS
Sep
25
Funeral service
2:00p.m.
Family Farm In Todd
9260 Three Top Road, Todd, NC
Funeral services provided by:
Austin & Barnes Funeral Home & Crematory
MAKE A DONATION
MEMORIES & CONDOLENCES
Sponsored by Austin & Barnes Funeral Home & Crematory.
2 Entries
Betsy, as we knew her, was such a joy and always wore a smile. She was passionate about doing the right thing and was always helping others, especially those less fortunate. She will be missed at Impact Church. Blessings to the family!
Donna Wise
September 27, 2021
She was a Light in this Dark World. Thank you for sharing your Loving Mother with the Nurse Family. She was the World's Greatest Role Model Teacher as she was my Kindergarten Teacher location, Hartsell School Building. She taught me voice lessons one summer. As, I remember singing All I Want Is A Room Somewhere from My Fair Lady. She thought me how to sing several songs, as I used this one to compete at Barber-Scotia College, Concord, NC for the UNCF pageant. She knew and loved the entire Nurse Family as we also loved Christian, Matthew, and Charles/Graham, etc. We send our heartfelt condolences but if we live right Heaven belongs to you/us inclusive. Continued Love and Blessings, Ingrid Nurse c/o Mildred Nurse, Carlos Nurse, CMsgt The entire Nurse Families
Ingrid Nurse
Friend
September 26, 2021
Showing 1 - 2 of 2 results