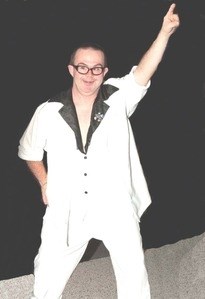 T.J. was a graduate from Central Cabarrus High School in 1997. He was a part of Special Olympics of Cabarrus County for over 30 years, where he enjoyed playing softball and basketball, as well as being on a competitive cheer team. T.J. enjoyed swimming and having fun with family and friends. He loved all the holidays, especially Christmas, as he was a child of God, which shined through with just that smile he had that would light up a room. T.J. loved to sing country music, mostly Garth Brooks' "Friends in Low Places" and play his guitar. He loved to watch wrestling, as he told us many times that he worked for the "WCW" with Ric Flair. He even had a bull tattoo like "The Rock." T.J. enjoyed traveling, mostly via a cruise ship, where he was a 3-time champion of the "hairy chest" contest. T.J. never met a stranger, loved everyone he would meet with his whole heart, and would tell you his life story for as long as you would listen. He would be the first to pray for you no matter how big or small. T.J. had several "wives, girlfriends, and fiancées" (they know who they are) that he loved dearly. T.J. was a loving son and brother. He will be dearly missed and forever loved.

Survivors include his mother, Peggy Carpenter Furr of Concord; sisters, Keisha Walsh and husband, Josh, of Concord, and Robin Colyer and husband, Rob, of Concord; grandparents, Rita and John Rary of Concord, Libby and Gary Clark of Kannapolis, and Ron and Allie Mann of Dawsonville, Ga.; and an adopted great-grandmother, Frances Walsh of Concord. He is further survived by aunts and uncles, Casey and Brandy Haithcox, James Carroll, Jennifer and Bud Brown, Ashley and James Caul, John Rary, Nechia Carroll, and Jan Swaringen; nieces and nephews, Tyler and Cloe' Walsh, Mason and Taytum Colyer, Cody and Caleb Haithcox, and Emma Rary; cousins, Charisma, Dominic, Arianna, Natalie, Shay, Scott, Jamie, Megan, Wendy, and Edward; and many other relatives and family friends.

The family will receive friends from 4 to 6:15 p.m., Tuesday, Oct. 12, at Hartsell Funeral Home of Harrisburg. The funeral service in celebration of T.J.'s life will follow at 6:30 p.m., in the funeral home chapel, officiated by the Revs. Tom Smith and Brian Duncan. T.J. will be laid to rest during a private committal service at West Concord Cemetery.

Memorial donations may be made to Special Olympics of Cabarrus County, 7321 Raging Ridge Rd., Harrisburg, NC 28075.

www.hartsellfh.com
Published by Concord & Kannapolis Independent Tribune on Oct. 10, 2021.
To plant trees in memory, please visit the Sympathy Store.
MEMORIAL EVENTS
Oct
12
Visitation
4:00p.m. - 6:15p.m.
Hartsell Funeral Home
Harrisburg, NC
Oct
12
Funeral service
6:30p.m.
Hartsell Funeral Home
Harrisburg, NC
Funeral services provided by:
Hartsell Funeral Home - Concord
MAKE A DONATION
Please consider a donation as requested by the family.
MEMORIES & CONDOLENCES
Sponsored by Hartsell Funeral Home - Concord.
2 Entries
We will Miss TJ so much He Would Always Be in our Thoughts and Especially in Our Hearts.. He will be missed by everyone
Eddie ,Jennifer,Patrick .Noah . Crystal
Friend
October 11, 2021
Rita, so sorry to hear about your grandson.
Lewis McCombs
Friend
October 10, 2021
Showing 1 - 2 of 2 results