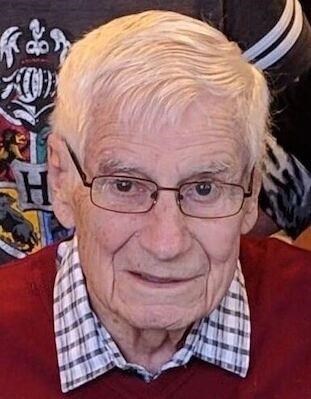 Marshall, MI - Daryl M. Miller, 96, of Marshall, Michigan, died peacefully on August 20, 2020 at the Maplewood Assisted Living Facility with family by his side. He was born on January 30, 1924 in Morgantown, Indiana to James Byron and Pearl Louisa Miller. He had two brothers, Durward and Dwight, and two sisters, Ernestine and Gretchen, all of whom preceded him in death.

Daryl married Anna Margaret Walker of Franklin, Indiana on September 26, 1942. They were married for 67 years until her death in 2009. During World War II he served in the 78th ("Lightning") Division of the United States Army. He received the Purple Heart for being wounded during the Battle of the Bulge.

Daryl began his teaching career in Brownstown, Indiana, then Scottsburg, Indiana, and then Ben Davis High School in Indianapolis, Indiana, where he taught Chemistry for 32 years and was the Head of the Science Department for 30 years. He also taught night classes at Indiana University/Purdue University in Indianapolis (IUPUI).

A longtime resident of Plainfield, Indiana, Daryl was a member of the Bartlett Chapel United Methodist Church where he taught adult Sunday School for numerous years.

Daryl is survived by his son Dale (Susan), four grandchildren - Walker (Tina), Kate Ambrose (Kris), Sarah Lane (Frank), and Sam (Beth). He was also the beloved great-grandfather of Sadie, Madison, Noah, Diego, Felix, Chase, Ivy and Javier. He was well respected and well loved by all who came to know him.

Cremation has taken place and a private family service will be held in Indiana. Arrangements were entrusted to Kempf Family Funeral and Cremation Services, 723 US Hwy 27 N, Marshall, MI 49068. Please visit https://www.kempffuneralhome.com to view the online obituary, sign the guest book, and leave condolences to the family. Donations may be made to: Wounded Warrior Project, PO Box 758517, Topeka KS 66675-8516, https://www.woundedwarriorproject.org/. Donations may also be mailed to the Kempf Family Funeral Home and Cremation Services, P.O. Box 519, Marshall, MI 49068.


Published by The Indianapolis Star from Aug. 20 to Aug. 23, 2020.
To plant trees in memory, please visit the Sympathy Store.
MEMORIAL EVENTS
To offer your sympathy during this difficult time, you can now have memorial trees planted in a National Forest in memory of your loved one.
Funeral services provided by:
Kempf Family Funeral & Cremation Services
MAKE A DONATION
Please consider a donation as requested by the family.
MEMORIES & CONDOLENCES
1 Entry
A kind and gentle man. One of the best, and one of my favored teachers, at Ben Davis. Kim (Brauer) Goss; BD ‘76
Kim Goss
Student
August 23, 2020
Showing 1 - 1 of 1 results