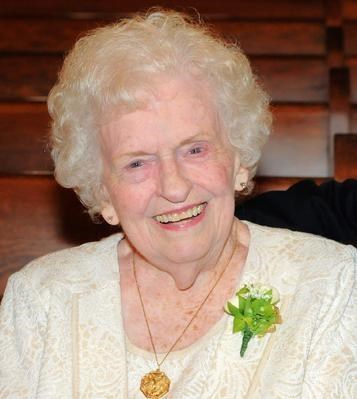 Genevieve (Gen) W. Coffey passed away March 20, 2020 while surrounded by her children and prayed for by her extended family around the world. With a quick smile and a warm greeting for everyone she met, she was the matriarch of a large family. Born in Indianapolis on October 2, 1925 to Margaret (Latchford) and Joseph A. White, she was raised in Holy Cross parish, and later attended St. Mary's Academy and Marian College (University).

While playing with a classmate at Highland Park, a little boy carved a buckeye into a ring and gave it to her. That little boy, Michael R. Coffey Sr., grew into the man whom she would marry in 1949 and spend 65 years building a post-war life raising five children and founding an electrical contracting business, Major Electric Co.

Genevieve was preceded in death by her parents; her husband of nearly 65 years; and her brother, Joseph White. She is survived by her children Michael (Becky), Daniel (Lisa), Timothy (Mary Ann), Mary, Jane (Thomas) Elliott; sixteen grandchildren and sixteen great-grandchildren; her brother John F. (Bobbie) White, and sister-in-law Lillian White .

Nothing was more important to Gen than her family, her faith, and her Irish heritage. She was the kind of person who made others feel special because they were special to her. She was genuinely interested in every person she encountered and wanted to know everything she could about everyone. If you were from Indianapolis or had roots in Holy Cross parish, she could help you reminisce about your family members going back for several generations. She always had a kind word or gesture of support for all she met. No doubt heaven will welcome her with open arms.

Gen loved to travel. She and Michael (Dick) toured the United States including several trips with her children and parents in a "woody" station wagon filled with nine passengers and pulling a camper! In later years, they traveled with Dick's sister and her husband, Aggie and Dick Perry, in the relative comfort of an RV. They loved playing cards, taking photos and being together, just as they had done with their children years before.

Gen and Dick toured many different countries during their life together, but no place (besides Indianapolis) was more important to her than Ireland. They visited often and kept in contact with family from "home". Gen was the link that allowed the family abroad and the family here to maintain a close relationship.

Gen treasured family gatherings especially at Thanksgiving time, where she was the hub of conversation. She valued her relationships, especially with her brother John and sister-in-law Bobbie. To her grandchildren, she was the "definition of a perfect Grandma," always available with a listening ear and open heart.

The family would like to extend their gratitude to Dr. Craig Cieciura for all his care and kindness. They would also like to thank Moneeca Frost, whose friendship Gen valued.

A private memorial service will be held at St. Joseph Cemetery. Services will be handled by Oakley Hammond Funeral Home (oakleyhammond.com). A public Mass of Christian burial will be announced at a later date. Memorial contributions may be made to Miracle Place (amiracleplace.org) c/o 14513 Whisper Wind Drive, Carmel, IN 46032.


To plant trees in memory, please visit our Sympathy Store.
Published by The Indianapolis Star from Mar. 22 to Mar. 29, 2020.
MEMORIAL EVENTS
No memorial events are currently scheduled.
To offer your sympathy during this difficult time, you can now have memorial trees planted in a National Forest in memory of your loved one.
Funeral services provided by:
Oakley-Hammond Funeral Home
MAKE A DONATION
MEMORIES & CONDOLENCES
7 Entries
We have so many great memories of Mr & Mrs Coffee with Mom & Dad through the years—especially at St Patrick’s Day.
We were certainly gifted with the best in the parent department.
God bless all the Coffee family!
Jean Gause Rawlinson
Jean Gause Rawlinson
Friend
March 16, 2021
Dear Coffey Family,
Aunt Gen was the Best Aunt a person could ever have. We will deeply miss her laugh and love. I find comfort knowing my cousins carry her beautiful spirit in them. Lots of love to you all. Mary White
March 29, 2020
May God bless you and your family in this time of sorrow.
Margaret Krzesinski
Friend
March 29, 2020
Gen, you will be missed so much by your beautiful family, but also will be missed greatly by my family. I'm so grateful I had the pleasure of knowing you; your hugs were the best hugs on earth. Sending love and prayers to the Coffey family.
Kathy Centracchio
March 29, 2020
Dear Coffey Family,

I'm so sorry to hear of your loss, may your memories comfort you during this difficult time. It was ALWAYS a pleasure seeing Genevieve in the office. Know that you are in my thoughts and prayers.

I was so sad to hear of Mrs Coffey's passing even though she lived a full life. I was only with her once a month but I enjoyed those few hours with her. We had many conversations and laughed so much sometimes till we cried. She talked about all of you often and was so proud of you. She loved each and everyone of you so much.

My deepest condolences to all of you. May God bring you comfort and peace in knowing she is now with the Lord and your Dad.

It was a pleasure knowing Mrs Coffey and I will miss her dearly.
Donna Richards
March 23, 2020
Dear Coffey Family,

Our family fondly remembers so many stories & happy times that our parents had with your parents. We remember the thoughtful, encouraging notes your mom would send to ours. Your mom & dad were kind, good, smart & fun.
I'm sure all of them are having a marvelous party in heaven!