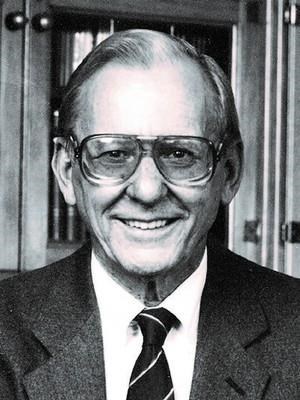 The youngest of nine children, George was born in Pittsfield, Massachusetts on July 25, 1923. After graduating from high school at the age of 16, he entered a training program at General Electric Co. that sent him to nearby Williams College for intensive study in analytical chemistry. The next six years saw him working on the Manhattan Project while also serving in the United States Navy. He enrolled in the University of Michigan in the fall of 1946 where he joined Lambda Chi Alpha. After completing his graduate degree in business administration, he joined the staff of Lambda Chi Alpha as a traveling secretary. Two years later he became service secretary, in charge of the undergraduate operations of the fraternity. He would continue in that position until 1968 when he became executive director, a position he held until his retirement in 1990.

During his 40 years of service to Lambda Chi Alpha, it grew from 137 to 223 chapters and its membership increased from 50,000 to 196,000 initiated members. In 1972, under his leadership, the fraternity's General Assembly voted to adopt the Associate Member Program, effectively removing "pledgeship" from the fraternity.

George received scores of recognition plaques and awards from the chapters of Lambda Chi Alpha and inter/national fraternities. He was awarded Lambda Chi Alpha's Order of Achievement in 1990 and, in his honor, the fraternity created the George W. Spasyk Order of Interfraternity Service to recognize those men and women who have contributed outstanding service in the betterment of all college fraternal organizations. In addition, he has been honored by the highest awards within the interfraternity community including the North-American Interfraternity Conference's Gold Medal, the Fraternity Executive Association's Distinguished Service Award, and the Association of Fraternity Advisors' Jack Anson Award.

He is preceded in death by his parents, George and Polly Weczerkovska Spasyk, and eight siblings: William (Madeline), Steven (Dorothy), Peter (Ann), Michael (Helen), John (Jean), Nellie Caccamo (Dominick), Ann Spasyk and Mari Theilig. He is survived by a three nieces and one nephew.

Memorial contributions may be made in his honor to the George W. Spasyk Memorial Endowment Fund of the Lambda Chi Alpha Educational Foundation.

There will be a private family burial. In the coming months, the Lambda Chi Alpha International Headquarters will schedule multiple celebrations of life both in Indianapolis and at the Stead Leadership Seminars in Denver and St. Louis.

Published by The Indianapolis Star on May 19, 2019.
To plant trees in memory, please visit the Sympathy Store.
MEMORIAL EVENTS
To offer your sympathy during this difficult time, you can now have memorial trees planted in a National Forest in memory of your loved one.
Funeral services provided by:
Dwyer Funeral Home
MAKE A DONATION
MEMORIES & CONDOLENCES
1 Entry
I only found out tonight about George's passing. George was a great soul and made Lambda Chi what it is today. He will be sorely missed by all who have had the privilege of meeting him.
Todd Curro
June 28, 2019
Showing 1 - 1 of 1 results