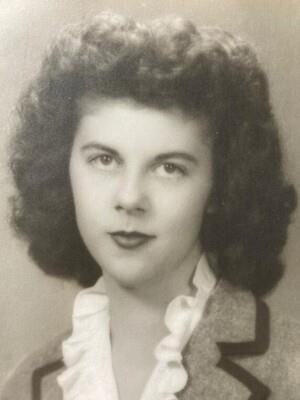 Indianapolis - Joan Ellen Hicks, 94, passed away with her children by her side on Saturday evening, April 17, at Otterbein Senior Living in Franklin, Indiana. Joan was born on July 13th, 1926 in her parent's Indianapolis home to Russell J. Murphy and Ethel Irene (Thomson). She was a 1944 graduate of Howe High School and attended Olivet Nazarene College.

Joan met her future husband, Joseph F. Hicks, in 1946 after his discharge from the Army Air Force and they were married later that year on Nov. 8th, 1946. After the birth of their daughters, Kathleen and Maureen, Joe and Joan moved to Southern California where their son, Joseph Jr., was born. Through the years, Joan enjoyed gardening, oil painting, and collecting antiques. She stayed active in the Nazarene Church and is still remembered for her beautiful singing voice.

In 1994, Joe and Joan relocated to Reno, Nevada to be near their children. Their marriage spanned 60 years, until Joe's death in 2006. Joan returned to Indianapolis shortly after and once again made it her home. Family and friends are sure that after meeting the Lord and being reunited with her loved ones in Heaven, she will locate the angel choir and find a way to sing with them!


Published by The Indianapolis Star from May 3 to May 9, 2021.
To plant trees in memory, please visit the Sympathy Store.
MEMORIAL EVENTS
To offer your sympathy during this difficult time, you can now have memorial trees planted in a National Forest in memory of your loved one.
MAKE A DONATION
MEMORIES & CONDOLENCES
0 Entries
Be the first to post a memory or condolences.