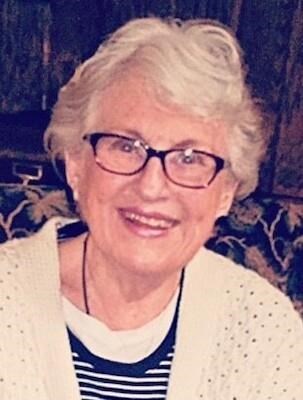 Noblesville - Joanna Margaret Owens of Noblesville, Indiana, passed away peacefully on Wednesday March 31st, 2021 after a long bout with the effects of Dementia. She was 86 years old.

Joanna graduated from Thomas Carr Howe High School in 1954 and was married to James Richard Owens on April 23rd, 1955. She then earned an Associate Degree from Indiana University and worked as a Laboratory Technician for various Hospitals, cardiologists, internal medicine and general practitioner physicians in Indianapolis, Minneapolis, and Northern Indiana until 1977. Joanna relocated to Noblesville in 1978 and worked for the Indiana Department of Natural Resources and the Hamilton County Soil and Conservation District until retiring in 2000.

Joanna was a long time member of the First Presbyterian Church of Noblesville. She was also a member of the Hamilton County Republican Women's Club, serving as a Precinct Committee Person for many years. She held membership in the Noblesville Preservation Alliance and volunteered many hours at Riverview Hospital and Connor Prairie, especially after retirement.

Joanna will be remembered for her independent spirit, love of life and dedication to her family.

A brief service is scheduled for Saturday, April 17th, 2021 at 10:30am, with an open house to follow in the Fellowship Hall, at First Presbyterian Church of Noblesville, 1207 Connor Street, Noblesville. Randall and Roberts Funeral Homes is assisting with arrangements.

Memorial Contributions can be made in Joanna's name to the Humane Society for Hamilton County, 10501 Hague Road, Fishers, IN 46038; or the Greater Indianapolis Chapter of the Alzheimer's Association, 50 East 91st Street, Suite 100, Indianapolis, IN 46240.

To share a memory or condolence, please visit: www.randallroberts.com


Published by The Indianapolis Star from Apr. 6 to Apr. 7, 2021.
To plant trees in memory, please visit the Sympathy Store.
MEMORIAL EVENTS
Apr
17
Service
10:30a.m.
First Presbyterian Church of Noblesville
1207 Connor Street, Noblesville, IN
MAKE A DONATION
Please consider a donation as requested by the family.
MEMORIES & CONDOLENCES
0 Entries
Be the first to post a memory or condolences.