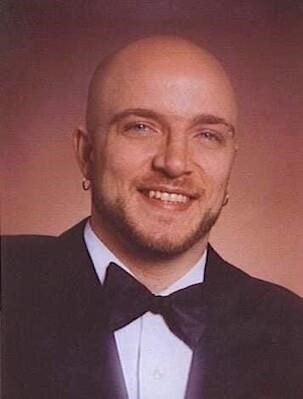 Matthew Brian Abrams left this place for a better home on May 7, 2021. He was 49. Matthew died peacefully and with family.

Matthew was a star. At Warren Central High School, he was a shining light. His friends and others were drawn to him for his always present smile and outgoing personality. He played drums in several school bands and the marching band. He had a pretty high school sweetheart. His life was before him. In his senior year while running an errand for a friend, he lost his physical abilities. Yet, his star shined on. He adopted to playing electronic drums. He played every Sunday for his church, attended church camp and helped others. Despite his circumstances you would always find him with a big smile and a welcoming greeting…and a cheery presence. He was amazing.

Despite the attention given him, Matt never thought of himself as different; he just had physical limitations. He was just Matt and he only wanted what others want in life… love, family and friends, excitement, loyalty, the chance to live an ordinary life.

He was a proud Freemason. He read voluminously and spent time just thinking about what he had learned and what was next. Always offering his intellectual analysis. He stayed up all night to see Manchester United play and follow the worldwide soccer leagues. He was always eager to be with his nephews.

Matthew was preceded in death by his older brother, Harry Earl, who passed just 3 short months prior. He will be reunited with his father, Harry Abrams; and the family prays for a healing. He will find his beloved Grandparents Minnie Pearl and George Toler & Lillly and Harry Abrams. He leaves waiting to join him, his mother Joyce Abrams Metz, his brother Doug and his wife Lee, his sister-in-law Tish Abrams, his nephews, Harrison, Will and Max Abrams and his stepson E.J. Dickerson.


To plant trees in memory, please visit our Sympathy Store.
Published by The Indianapolis Star from May 27 to May 30, 2021.
MEMORIAL EVENTS
No memorial events are currently scheduled.
To offer your sympathy during this difficult time, you can now have memorial trees planted in a National Forest in memory of your loved one.
Funeral services provided by:
Oakley-Hammond Funeral Home
MAKE A DONATION
MEMORIES & CONDOLENCES
1 Entry
Thinking of Matt today, MUCHLY. His wisdom and perspective, bright spirit, and endless energy are emblazoned in my memory. <3
Kristen Perkins
Friend
July 2, 2021
Showing 1 - 1 of 1 results