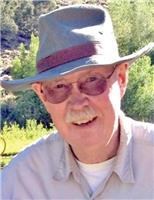 BORN
1947
DIED
2021
FUNERAL HOME
Strode Funeral Home
610 S Duncan St
Stillwater, OK
Jack Dillwith, 74, died November 14, 2021 in Stillwater, OK. Funeral services will begin at 10 a.m. Friday, November 19, 2021 at the Strode Funeral Home Chapel in Stillwater with burial to follow at Fairlawn Cemetery in Stillwater. Strode Funeral Home is handling arrangements.
Jack William Dillwith was born August 18, 1947 in Tonopah, NV to Earl Allen Dillwith and Allice Schoustra Dillwith and was the oldest of four boys. He graduated from Bishop High School in Bishop, CA and then attended the University of California, San Luis Obispo where he graduated in 1969. Following his education there, he received a Master's degree in 1978 from St. Mary's University, San Antonio, TX and then a PhD from the University of Nevada-Reno in 1980. Lynda Joyce Holton became his wife on April 7, 1973 in the First Baptist Church in San Antonio, TX at a ceremony officiated by Jack's brother, Reverend Thomas Dillwith.
After serving four years in the US Air Force through April 7, 1976, he was employed as an Assistant Professor at Oklahoma State University, Stillwater, OK where he taught in the Entomology Department until he retired in 2015. For more than 20 years Jack was active with Boy Scouts. He served in leadership positions at the local level for several years and many years in leadership positions in the larger Boy Scout Organization.
During retirement, Jack and Lynda traveled for many years to Nevada and other western states where they enjoyed visiting family, fly fishing and collecting rocks. During the past few years Jack was part of the Stillwater Rock and Mineral Club where he served as vice-president.
Preceding him in death was his brother Charles.
Survivors include siblings Thomas Allen, William Earl; son Earl Edward Dillwith (Katrina); and grandsons Michael William Dillwith and Oliver Karman Dillwith.
Condolences may be sent to the family and an online obituary viewed by visiting www.strodefh.com.
Published by Inyo Register on Nov. 20, 2021.
To plant trees in memory, please visit the Sympathy Store.
MEMORIAL EVENTS
To offer your sympathy during this difficult time, you can now have memorial trees planted in a National Forest in memory of your loved one.
Funeral services provided by:
Strode Funeral Home
MAKE A DONATION
MEMORIES & CONDOLENCES
Sponsored by Strode Funeral Home.
0 Entries
Be the first to post a memory or condolences.