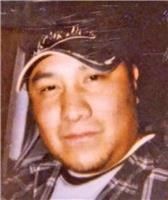 BORN
1979
DIED
2021
Joel Christopher Jeff was born on August 18, 1979, in Bishop, CA to George Paul Jeff Sr. and Amelia Rogers. Joel was the second youngest of his siblings. Joel spent most of his 42 years in Bishop, California.
Joel enjoyed a variety of activities especially anything outdoors but was most passionate about music and was a talented guitarist. Joel loved playing his guitar for family and friends. He was happiest when he was surrounded by his family and friends rocking his guitar. His favorite music to play was rock, heavy metal, and alternative rock. Back in the day, Joel had his own band called "Spit Fire" and would write his own music. Joel learned to play guitar as a youngster and his dad George was his idol and inspiration because he was a great guitarist.
Joel had a great love for his family and his friends and was always proud of his nieces and nephews and all their accomplishments. Joel looked forward to get-togethers where he could spend time with his loved ones playing horseshoes, swimming, fishing, playing fast pitch softball, cooking and BBQing, watching football (especially his favorite team the Denver Broncos), making smores with the kids, playing in the snow, playing board games, and he was an avid recycler. In the summertime Joel looked forward to going to all his favorite swimming holes including the artesians, falls, canal, river, millpond, and hot ditch. Joel also liked going to the casino and gambling with his mom playing the slots and blackjack.
Joel had a tender side to him, and it warmed his heart when he would often surprise his mom and sister with sodas and sweets. He liked watching his nieces and nephews play in the yard and would protect and watch over them to make sure they didn't get hurt. He liked to give his momma massages but always said he had to be paid cash money – Haha.
Although Joel was born and raised in Bishop, he spent time in Lemoore, California and in Prescott, Arizona with his family but always looked forward to returning to his home. His roots were here in the Owens Valley.
Joel's personality could be classified as giving, thoughtful, stubborn, sweet, loving, and rez smart – Joel was articulate and his friends liked that about him. He was a ladies man and the old and young were attracted to him. One of his favorite sayings was, "she's looking at me." Joel was also extremely competitive and liked to be the center of attention. Joel was proud of his Native American heritage and his long hair.
Joel passed away on November 12, 2021, at his home in Bishop. Joel is survived by his mother Amelia Rogers, brothers Daniel Jeff and George Jeff, Jr., sisters Louella Jeff (Tony Frazier), Cheryl Jeff, Ann Minder (Tim Minder), and Barbara Keller (Charles Keller, Sr.) nieces and nephews Koepa, Noo-Ko, Kaiba, Ta-Tsoka, Danielle, Moses, Jelacee, Zoey, Zabian, Anthony, Kyhayla, Peja, Daisy, Tabesua'sua, WaNaAh, Topaz, Pawahnee, Tsidopi, Hugwapi, Charles Jr., Tee-ah-ni, his great nieces and nephews, and by his beloved aunts, uncles, and friends. Joel is preceded in death by his father George Paul Jeff, Sr.
A traditional Cry Dance will be held on Saturday, November 20, 2021, at 8 p.m. at Joel's residence (318 Winuba Lane, Bishop, CA) and graveside funeral services will be held on Sunday, November 21, 2021 at 10 a.m. at Sunland Indian Cemetery where Joel will be buried. A potluck luncheon will be held after the funeral services at the Jeff Residence (318 Winuba Lane).
Although losing Joel has been hard, the family is at peace knowing that Joel is at peace and is in a good place. The family thanks everyone for their thoughts and prayers.
Published by Inyo Register on Nov. 18, 2021.
To plant trees in memory, please visit the Sympathy Store.
MEMORIAL EVENTS
Nov
20
Service
8:00p.m.
Cry Dance
318 Winuba Lane, Bishop, CA
Nov
21
Graveside service
10:00a.m.
Sunland Indian Cemetery
MAKE A DONATION
MEMORIES & CONDOLENCES
1 Entry
And he played the hell out of his guitar! Sure going to be missed! Hi
E.M
November 19, 2021
Showing 1 - 1 of 1 results