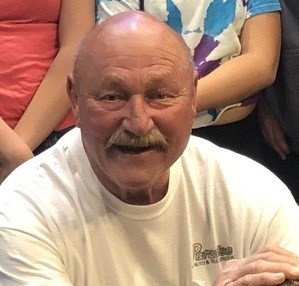 BORN
1952
DIED
2021
August 22, 1952 - August 26, 2021 Barry Michael Braniger, 69, of Lake Havasu City, Arizona, passed away on August 26, 2021 at Havasu Regional Medical Center. Barry was born in San Bernardino, California on August 22, 1952; son to Marcy and Fred Braniger. He was the owner of Paradise Auto & Truck in Lake Havasu City, and was the previous owner of Del Rosa Motors-Putt Putt Co. Barry enjoyed going to the casino and spending time with his family and friends. Barry is survived by his girlfriend Darlene Reive; children: Kristy Cacucciolo, Kathy Garrison and Butch Braniger; grandchildren: Chase Simpson Garrison, Shelbie Garrison, Nicolette Cacucciolo, Justin Cacucciolo, Mady Braniger and Livy Braniger; his brother-in-law Jon Shultz and his wife Jan with their children; and his mother-in-law Mary Taggart. He was preceded in death by his wife of 39 years, Sue Braniger. In lieu of flowers, donations can be made to Hospice of Havasu. Services will be held on October 16th at 11 a.m. at Calvary Baptist Church: 3100 Sweetwater Ave, Lake Havasu City, AZ. Arrangements were placed in the care of Desert Lawn Funeral Home-Lake Havasu City. Desert Lawn Funeral Home - Lake Havasu City 928-854-3100

Published by Daily Bulletin on Sep. 5, 2021.
To plant trees in memory, please visit the Sympathy Store.
MEMORIAL EVENTS
Oct
16
Service
11:00a.m.
Calvary Baptist Church
3100 Sweetwater Ave, Lake Havasu City, CA
MAKE A DONATION
MEMORIES & CONDOLENCES
Sponsored by Inland Valley Daily Bulletin.
12 Entries
You will be so dearly missed Barry! Our deepest sympathy to the Family, Love The Andreasen's
Matt & Holly Andreasen
October 15, 2021
We will keep your family close to our hearts.
Dick and DeLynn Rucker
October 15, 2021
Barry was a straight shooter and the best car guy I ever dealt with. Honest and fair and he'll be missed. Rest well my friend.
Mike Aldridge
October 4, 2021
We are so sorry for your family´s loss. It´s hard to imagine life without him. I´m going to miss him and our conversations he was a good friend for 30 years and a good boss I did miss driving with him. We will cherish the memories we have together. He did mean a lot to our family. Please know we are thinking of you all and praying for your family.
Heather Meek
Friend
September 15, 2021
Great guy, loved doing his auction finds to fill his lot with vehicles! I always enjoyed working with Barry! Professional yet friendly! A Havasu Legend for sure!
Shelly Stone
Work
September 8, 2021
We will miss you,old friend. You are loved by many and your absence will truly be felt by us.
Rene' and Angie
Friend
September 7, 2021
Barry was a giving soul who always took care of those he loved. Always greeting us with a big Hi and a hug. And of course a meal fit for a King and I must add a village. We will miss all the good times laughter tears and memories made. Rest In Peace my friend
Ken & Michelle Pounders
Family
September 7, 2021
May God bless you and your family in this time of sorrow. Our hearts and prayers are with you, Bill Sr.,Laura,Bill JR.,Bryan ,and Bob,and the rest of our family.
William & Laura Masche
Family
September 6, 2021
We are saddened to hear that Barry, passed. May our Lord bless and comfort your family. If there is any thing we can do just lit us know. WE will do what what we can. Thought and prayers are with you and yours. God bless
Tim and Nancy Klosinski
Family
September 6, 2021
May God´s loving kindness and comfort help you and your family through this very difficult time. Matthew 5:4
LL
September 6, 2021
My prayers are with the family. Whenever he came into Fedex he always had a smile and kind words.
Michele Russell
Work
September 5, 2021
Heartfelt condolences to Darlene and Barry´s family from the Bruce McKie family. My father loved working with Barry at Paradise and enjoyed their casino adventures. Dad would be shocked and saddened by this loss. Gods blessings to Barry and Family.
Ruth McKie Brown
Friend
September 5, 2021
Showing 1 - 12 of 12 results