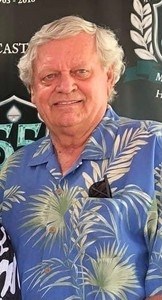 BORN
1951
DIED
2021
2/11/1951 - 8/19/2021 JERRY K. QUIEL, 70, passed away on August 19, 2021, at his home in San Bernardino, California. A wonderful Father, Grandfather, Brother, Uncle, Friend, and Businessman. He is survived by his son Erik Quiel, daughter-in-law Erika, granddaughters Ellouisa and Everly, Mary and brothers: Larry (Tammy) and Gary (Joanne). Jerry was born February 11, 1951 in San Bernardino to parents Raymond and Margaret Quiel. As a child, he had a paper route on his bike, was an avid swimmer, and attended San Bernardino High School, graduating in 1969. Jerry began his sign career washing trucks at Quiel Bros. Signs and advancing up the ladder as a journeyman sign installer. He then left to go on his own as Jerry Quiel's Inland Sign Service. Eventually, Jerry and his brothers teamed up and created a new company, aptly named 3 Quiels Signs, Inc. In 1988, Jerry and his brothers acquired Quiel Bros. Signs from their father in which they operated until their retirement in July 2020. Several landmarks around California have ties back to Quiel Signs. Jerry enjoyed traveling all over the U.S. to various industry events and gatherings for the World Sign Association and the California Electric Sign Association. A well-loved man, he enjoyed meeting new people from every facet of his life while maintaining old friendships from childhood. No one who met Jerry would forget his penchant for celebrations as well as a passion for cars, golf, fishing, NASCAR events, and visiting casinos. During his short retirement, he was able to spend more time with friends and his adoring granddaughters, watching them play sports and taking them fishing. He most recently spent time at the lake and frequented Lake Havasu City, Arizona. A celebration of life will take place with family and friends.

Published by Daily Bulletin on Sep. 8, 2021.
To plant trees in memory, please visit the Sympathy Store.
MEMORIAL EVENTS
To offer your sympathy during this difficult time, you can now have memorial trees planted in a National Forest in memory of your loved one.
MAKE A DONATION
MEMORIES & CONDOLENCES
Sponsored by Inland Valley Daily Bulletin.
1 Entry
With Sympathy Although we know at such a time there's little we can say. We want to let you know that you are in our thoughts today. Sincerely,
San Bernardino City Library Foundation
Other
September 13, 2021
Showing 1 - 1 of 1 results