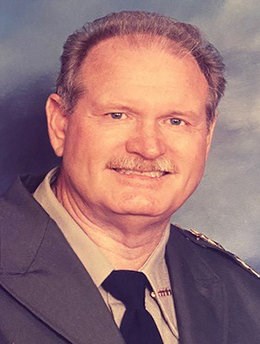 Harold Dean Carter passed away on September 8, 2021. Harold was born September 15, 1942 in Chickasha, Oklahoma to Willard and Artie Carter. His family moved to the Imperial Valley arriving on Harold's first birthday. He grew up in El Centro attending Imperial Valley Schools, achieving his Masters Degree in Public Administration from SDSU. In 1959 he met the love of his life, Carolyn Walton and they were married in February 1961. His law enforcement career began in 1968 with the El Centro Police Department where he served 30 years and rose through the ranks retiring in 1998 as Chief of Police. In 1999 he was elected as Imperial County Sheriff where he served two terms. He served, not only the citizens of Imperial County in public safety, but taught Criminal Justice at both Imperial Valley College and SDSU for over 20 years, retiring in May of 2020. His service to the community was second only to his faith in the Lord and his service at Central Baptist Church, where he was a member since 1978 and served as a deacon. He had many accomplishments, but one of his proudest was being the first officer from Imperial Valley to attend the FBI National Academy in 1983 in Quantico, Virginia.

Harold was proceeded in death by his parents, his brothers Tom, Willard, Don and Raymond, and is survived by his loving wife of 60 years, Carolyn, daughter Angela (Chris), son Harold (Christina), grandchildren Tara, Brandon, Andy and Kailee and great-grandsons, Blake, Preston and Ryder; and is also survived by his sister Frances Tibbett and Uncle Sid Carter, as well as numerous nieces and nephews.