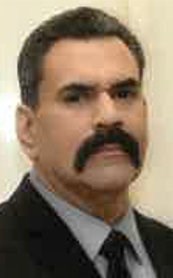 Joseph J. Tornero, AKA Big Joe and Joe Big 5 was called home on September 13, 2021 when he went to be with our Savior Jesus Christ.

He was born June 8, 1962 in Los Angeles, CA to Emma Peres and Luis Tornero. He was raised in Los Angeles and graduated from Cathedral High School (Preparatory school) in 1980. As a teen he joined the police explorers. At age 19 he worked as a bouncer for various night clubs, later joined the LAPD reserves, and then worked for Sectron Security. In 1990, Joe began working for Big 5 Sporting Goods in Los Angeles. He relocated to Imperial County when Big 5 first opened in El Centro and after only 2 months of the opening, was offered the position of store manager. He led that position until his passing.

Joe loved what he did for a living and made many friends due to his outstanding service, character, demeanor, and knowledge of the products he sold. Joe was a believer and a true patriot. He loved God and his country. He enjoyed hunting, fishing, watching the Raider games, and cooking for his church, family, and friends. He was a wonderful husband, great father, and an excellent cook.

Joe was also a Hunting Education Instructor, a member of the National Rifle Association, and a former instructor of fish and games.

Joe met his wife Adriana Tornero in June of 2012. Their relationship blossomed and they married on October 5, 2013 and combined a family. Joe had 3 daughters and a son, and Adriana had 2 sons.

Joe was preceded, in death by his father Luis Tornero.

He is survived by his wife, Adriana Tornero(Cerda); his three children, Tawnya Victoria, Joseph Erik, and Sarah Jo Tornero; his three stepchildren, Lynette Hernandez, David and Daniel Esparza; and grandchild, Noah Rivera (Lynette). He is also survived by his mother, Emma Tornero Peres; his siblings, Louie, Ramon, Rafael, and Emma Tornero; their spouses, and numerous nieces and nephews.

Joe, you will be greatly missed!

Celebration of Life will be held October, 1, 2021 at 6 p.m. at Calvary Chapel in El Centro. Burial will be held October 2, 2021 at 9 a.m. at Evergreen Cemetery in El Centro.
Published by Imperial Valley Press Online on Sep. 24, 2021.
To plant trees in memory, please visit the Sympathy Store.
MEMORIAL EVENTS
Oct
1
Celebration of Life
6:00p.m.
Calvary Chapel
El Centro, CA
Oct
2
Burial
9:00a.m.
Evergreen Cemetery
El Centro, CA
MAKE A DONATION
MEMORIES & CONDOLENCES
11 Entries
My deepest condolences to the Tornero Family , Joe was a very good friend of mine who I met many years ago while working at Big 5, he had a big Heart, always treated everyone with respect , may you RIP my friend.
JOSE Siqueiroz
Friend
October 4, 2021
Our deepest condolences to you Diana and the family for the loss. RIP
Vizcarra Family
September 30, 2021
We met Joe at Big 5 buying softball stuff. Joe greeted us with a handshake and friendly smile. Instantly we became friends. He loved the valley. We are saddened that he passed away. He will always be in our hearts. Our condolences to his family. RIP
Nick and Leti Rodriguez
Friend
September 29, 2021
I will always remember you Joe...RIP
Priscilla V
September 29, 2021
So sorry for your loss Adriana. May God bless you and your family in this time of sorrow.
Malena Cochran
September 27, 2021
Adriana we were sadden by the news of Joes passing. He was a a great friend and fellow Christian. Please accept our condolences and prayers for your family. Heaven received another great angel!!
Larry and Georgia Libsack
Friend
September 27, 2021
RIP Joe. You were a great Manager to me when I worked at Big 5. My condolences to the family
Jana Velasquez
September 26, 2021
Adriana, I was so sad to read that Your husband passed away. I am so sorry. Through you I felt like I knew him. If there is anything I can do. Praying for you and him
Virginia Lopez
September 25, 2021
My deepest condolences to his family. Joe was a great guy and his presence will definitely be missed at Big 5
Letty Guzman Goddard
Friend
September 25, 2021
Adriana, May God bless you and your family in this time of sorrow.
Armida Celaya
Other
September 24, 2021
My heartfelt condolences to his family. Joe was a good friend for over 20 years. We hunted some together and did a lot of business with each other. He was a genuine nice person with a sneaky sense of humor. He will be sorely missed. Big 5 will never be the same without him. God bless you Joe.
DON MANNARINO
Friend
September 24, 2021
Showing 1 - 11 of 11 results