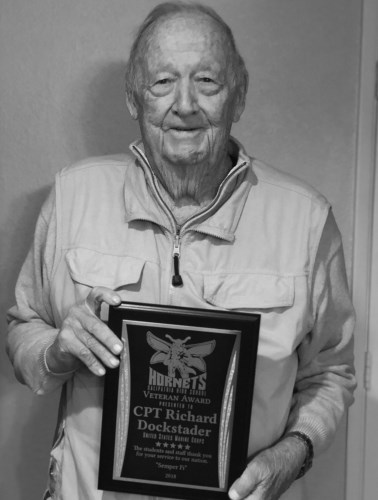 Richard was the only son of George and Gladys Dockstader. He was raised on a small ranch during the Great Depression. He attended Lemoore High School and married his high school sweetheart, Patty Lee. Their marriage lasted 73 years. They had 3 sons, George (Allinda), Duane (Patty Sue) and Patrick (Joanie) Dockstader, 8 grandchildren and 12 great-grandchildren.

Richard was a proud Marine, both as and enlisted man and an officer. After his first enlistment he attended Cal Poly San Luis Obispo and received a B.S. degree in Animal Husbandry. After graduation, he enlisted in the Korean War and was commissioned as an infantry officer. After serving in both 1st and 3rd Marine Division, he entered into the ag community. He developed ranches in CA and WA.

In mid 1980's he and his beloved wife moved to the Imperial Valley where he founded Golden Eagle Hay Co. He was soon joined by his sons, Duane & Patrick. Later, Patrick took over the company. Dick and Patty retired to Carlsbad, CA and later to Colorado, returning to Brawley in 2014. He had some health problems in the last few years but his doctor stated "The old Marin is THTK (too hard to kill)". He and his wife were devoted Christians and members of the Calipatria Community Church.

Memorial services will be officiated by Pastor Mike Hurtado and will be held at Calipatria Community Church on Wednesday, December 1, 2021 at 10:30 am.

In lieu of flowers, donations may be made to the Calipatria Community Church Food Bank.

He and his wife, Patty, will be interred with military honors at Miramar National Cemetery at a later date.
Published by Imperial Valley Press Online on Nov. 24, 2021.
To plant trees in memory, please visit the Sympathy Store.
MEMORIAL EVENTS
Dec
1
Memorial service
10:30a.m.
Calipatria Community Church
CA
MAKE A DONATION
MEMORIES & CONDOLENCES
6 Entries
Your distinguished career is to be long admired. So thankful to have shared many memories over the past 54 years. It is my honor to have had you as a friend. Some day we will meet again. Semper Fi TF
Tom Fordyce
Friend
November 29, 2021
To the Dockstader famil. So sorry to read mr Dockstader passed.my deepest condolence to the family. God Bless all his family. My you always keep your fondest memories in your heart. What a great couple!!
Evelyn Ayala
Friend
November 27, 2021
Condolences to the Dockstader family. My thoughts and prayers are with you.
Thelma Baker
Other
November 25, 2021
Mr. Dockstader had been a kind and generous man for as long as I had known him. He will wholeheartedly be missed.
Christopher Beltran
November 24, 2021
An amazing man who served his country and then gave so much to those around him! And left behind an incredible family ! Love and prayers to your family!
Mary Emanuelli
November 24, 2021
I am honored to have known Mr. n Mrs . Dockstater, my condolences to the family. God Bless You..
Steve Vasquez
Friend
November 24, 2021
Showing 1 - 6 of 6 results