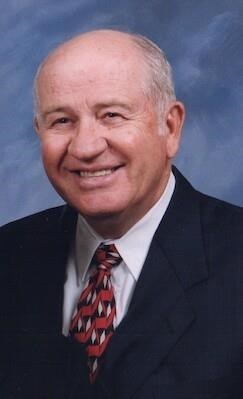 Decaturville - Lamarse H. " Cotton" Ivy, who was born the son of a sharecropper in Decatur County, Tennessee and led a wonderful life as a schoolteacher, coach, insurance agent, national country humorist, state legislator and Tennessee Commissioner of Agriculture, died on May 25, 2021 at the age of 91. Mr. Ivy passed away at AHC Westwood, in his hometown of Decaturville, Tennessee after battling an extended period of illness.

Cotton was born and raised only 40 miles from Eddy Arnold and Minnie Pearl and got his nickname because of the white hair he had as a youngster. The area's culture, local characters and the colorful language of the people had a great influence on Cotton's imagination and his ability to express himself in humorous stories. Cotton honed and used his gift of humor to relate to those around him by sharing his life and helping people in every way he could.

After serving in the United States Air Force and graduating from the University of Tennessee, Knoxville with a degree in agriculture, Cotton was a vocational-ag teacher, worked for American Cyanamide Company, followed by a tenure with Farm Bureau Insurance. He excelled at both companies as top salesman and eventually turned his attention full time toward entertaining with his special brand of country humor. He signed with the same booking agency as Jerry Clower, Top Billing in Nashville, recorded 4 albums and traveled the country bringing laughter and smiles to state organizations, conventions and national meetings throughout the year.

While he received many honors from organizations both government and private, the accomplishment of which he is most proud, is the countless lives he touched and led to his Savior Jesus Christ as a frequent lay speaker with the Gideons International. He spoke frequently at various churches and events throughout the country and spread the gospel to all who would listen.

Cotton is survived by his loving wife of 72 years Pat, his sons Vic ( Linda) and Tim ( Missy) both of Jackson, TN and five grandsons, Derek, Shane, Sam, Tim Jr., and Thomas, one granddaughter, Sara, and many great-grandsons and a great granddaughter, and daughters in law Deborah, Gail and Brenda. He is also survived by his brother Paul. He was predeceased by his sons Jan and Bob, as well as his parents, Howard and Annie, brother Newman and sister Genita.

The family will receive friends and loved ones on Friday May 28, 2021 from 10:00 AM to 2:00 PM at Trinity Assembly of God at 1141 Southwest St. Decaturville, Tennessee. The memorial service will follow at 2:00 PM officiated by Reverend Tommy Harrell and Reverend Steve Douglas and Reverend Keith Kirk. Burial will follow at the Concord Cemetery near Decaturville.

In lieu of flowers, the family requests donations be made to Gideons International P.O. Box 351 Parsons, TN 38363. The family request no food be brought to visitation due to Covid concerns.

Reed's Chapel - Decaturville is in charge of arrangements.


To plant trees in memory, please visit our Sympathy Store.
Published by Tennessean from May 25 to May 27, 2021.
MEMORIAL EVENTS
May
28
Visitation
10:00a.m. - 2:00p.m.
Trinity Assembly of God
1141 Southwest St, Decaturville, TN
May
28
Memorial service
2:00p.m.
Trinity Assembly of God
1141 Southwest St., Decaturville, TN
Funeral services provided by:
Reed's Chapel Decaturville
MAKE A DONATION
MEMORIES & CONDOLENCES
Sponsored by Reed's Chapel Decaturville.
1 Entry
Hey Griggs, this is Phemus. So sorry to hear of Bro. Cotton’s passing. He lived a full and influential life, filled with love for Sis Pat and his family. His love for the Lord and his witness will always be an example to guide you and Tim and your family for many years to come. I’m so thankful to say I knew Cotton Ivy. My pray is that God strengthen and sustain you, Sis Pat, Tim and your entire family. In the immortal words of Big Dave, “Hacie, grab dem yeaaaars”
Phemus
Friend
May 28, 2021
Showing 1 - 1 of 1 results