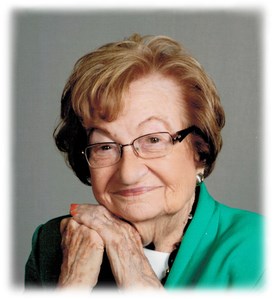 She was born December 1, 1922 in Hardeman County, TN, the daughter of the late Coleman B. and Julia Shearin Ross. She graduated from Bolivar Central High School in 1939 at the age of sixteen. She attended Lambuth University, playing basketball, tennis and cheerleading. She received her Bachelor Degree from University of Memphis and Masters from Troy University. She taught school for thirty-seven and a half years, in three states. Teaching in Tennessee fifteen and a half years, Alabama six years and in the state of Florida sixteen years, and retired from the State of FL and moved back to TN in 1986.

She was preceded in death by her husband of forty three years and the love of her life, Dr. Raymond M. Deming in 1995, two sisters, Joyce Ayers of Bolivar, Jimmie Lynn Dill of West Memphis, AR and a brother Don Ross of Henderson.

A private family graveside service will be held Saturday at 2:00 PM at Bolivar Memory Gardens.

The family will receive friends at the Bolivar Memory Gardens, 399 Orange Street, Bolivar, TN 38008 from 12:00 Noon until 2:00 PM Saturday, January 9, 2021. This will be a drive through event and will allow guests to greet the family and safely remain in their vehicles.
To plant trees in memory, please visit our Sympathy Store.
Published by The Jackson County Floridan on Jan. 9, 2021.
MEMORIAL EVENTS
Jan
9
Visitation
12:00p.m. - 2:00p.m.
Bolivar Memory Gardens
399 Orange Street, Bolivar, Tennessee
Jan
9
Graveside service
2:00p.m.
Bolivar Memory Gardens
Funeral services provided by:
Shackelford Funeral Directors Of Henderson
GUEST BOOK
2 Entries
Loved Mrs. Deming! One of my favorite teachers!! Prayers of sympathy for all of you.
Renea Harris Hilton
January 20, 2021
Mrs. Deming was my 5th grade teacher at Riverside Elementary in Marianna. She was a lovely woman through and through. I am so sorry about your loss and pray for your comfort and peace.
Mary Hales-Ward
January 12, 2021