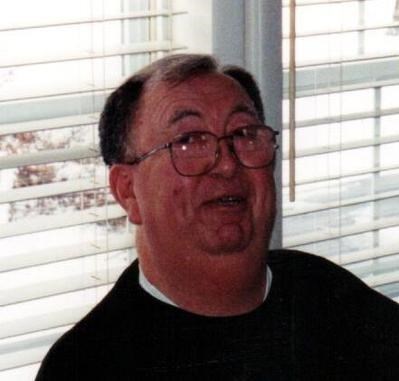 Basil T. Bauch, 84, of Lafayette, died at his residence Tuesday May 16, 2017. Basil was born in Earl Park, IN December 20, 1932, the son of the late John C. and Leona G. Hubertz Bauch. He was a graduate of Cathedral High School in Indianapolis, IN attended Purdue University and was a graduate of the Kentucky College of Barbering. Basil was employed as a barber in Lafayette from 1958 until retiring in 1983. He was a member of St. Boniface Catholic Church, the Secular Order of Fransiscans, a Life Member of the DAV, Life Member of the Korean Veterans Association, member of American Legion Post 492, and a charter member of St. Mark's Catholic Parish in Indianapolis. Basil was a longtime friend of the Sisters at the Carmelite Monastery in Terre Haute and had been a house father for Delta Chi Fraternity, Purdue Chapter for several years and served in the U.S. Army during the Korean War. Surviving are two nieces, Jean Ann Bauch of Indianapolis, IN and Mary Spencer of Big Clifty, KY as well as friends, Scott and Cathi McCoskey of Indianapolis, IN. He was preceded in death by two brothers and a sister. Friends may call at St. Boniface Catholic Church from 9:00 AM until the Mass of Christian Burial at 10:00 AM Tuesday May 23, Fr. Mark Walter officiating. The interment will follow at St. John's Cemetery at Earl Park, IN. You may leave memories and condolences at www.hahngroeberfuneralhome.com. Hahn-Groeber Funeral Home is honored to care for the family.


Published by Journal & Courier on May 20, 2017.
To plant trees in memory, please visit the Sympathy Store.
MEMORIAL EVENTS
May
23
Calling hours
9:00a.m. - 10:00a.m.
St. Boniface Catholic Church
IN
May
23
Mass of Christian Burial
10:00a.m.
St. Boniface Catholic Church
IN
May
23
Interment
St. John's Cemetery
Earl Park, IN
Funeral services provided by:
Hahn-Groeber Funeral & Cremation Services - Lafayette
MAKE A DONATION
MEMORIES & CONDOLENCES
Sponsored by Hahn-Groeber Funeral & Cremation Services - Lafayette.
4 Entries
Just was talking about Basil tonight and found that he had passed a year ago unbeknown to us. Tom was a wonderfully warm soul and mentored me and many, many of my fellow Delta Chi brothers at Purdue over the years. I have been very fortunate in my life to have 3 different men who were father figures to me over the years after I started college and Tom was the first. He always had a wise heart and was quick with a joke to lighten the mood. We got a chance a few years ago to see him when we were back in Indiana and he was still in great spirits and we enjoyed our time with him. There is a hole in my heart tonight knowing of Tom's passing.
Jim Hallar
Friend
May 24, 2018
I will always remember the joy basil Brought to our lives for the 2 years that we worked a Coffee stand at the farmers market . Basil was a caring soul , wonderful listener and wonderful to be around . I am saddened to have just found out about him passing but will cherish the memories we had. Phil
Phillip
May 8, 2018
Our Mom, Edith Prien, loved her "boys" from Delta Chi and held Mr. Bauch in the highest regard. He was a wonderfully kind and decent man, who is remembered with fondness by our family.
Jeanie Prien
May 22, 2017
We will miss you Basil. Thank you for your many loyal services to Delta Chi Fraternity and to the development of its graduates. God bless you on your journey to Heaven.
Phil Thompson
May 21, 2017
Showing 1 - 4 of 4 results