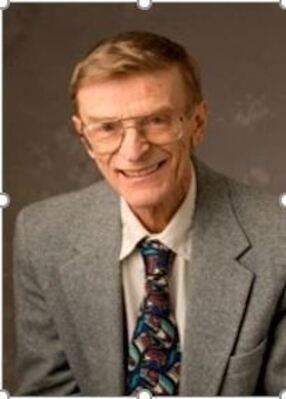 Dolph (Ted) was born August 21, 1940 in New Philadelphia, Ohio to Dorothy Wheland Ulrich and Charles Albert (Spike) Ulrich. As a boy he had a number of exciting adventures including falling through the ice on the Tuscarawas River and having a tree branch go through his thigh when he fell out of a tree. He became interested in magic and gave performances locally and elsewhere, including one in Cleveland under the name Fu-Ling-Yu.He also developed an interest in Sherlock Holmes and had a deer stalker cap that he wore playing Clue with his cousins.

After graduating top of his class in his local high school, he spent a semester at Moravian College in Bethlehem, Pennsylvania before taking a semester off to explore Europe, taking a tramp steamer from Dover, Delaware. On his return he transferred to Oberlin College in Ohio where he received his B.A. in Philosophy. It is also where he met his best friend and life partner, his wife Susan, at a bridge game in the Student Union.

The couple was married on February 29, 1964 while Ted was a graduate student attending Wayne State University in Detroit on an NDEA fellowship. While he was finishing his PhD he was offered a job in Purdue's Philosophy Department and joined the faculty in 1967, eventually becoming a Full Professor. He retired in 2013. He is the author of a number of professional articles. He co-authored a textbook, Elementary Symbolic Logic, with his colleague, William Gustason, that is still in print.

Ted was a 30+ year volunteer with the Friends of the West Lafayette Public Library including serving as co-chair for the Book Fair for many years. On of his initiatives was starting FOWLL, the Friends of the West Lafayette Public Library's account to sell books on Amazon.com. He was also active with Sycamore Audubon Society and NICHES Land Trust. His and his wife's interest in birds (started by the gift of a bird feeder from his parents), took them to all 50 states and 30 foreign countries. His favorite family of birds were the hummingbirds. He managed to see 147 of the roughly 320 existing species. His favorite birding experience of all time was the Sutton's Warbler (a rare hybrid) which showed up in their yard in April 1980 and drew visiting birders from as far away as Washington D.C.

He is survived by his wife of 56 years, Susan Howell Ulrich, and his cousins Joy Wheland Cole, (NC) Richard Wheland (PA), Louise Whitis (OH), Carol Floyd (OH), and Lois Spangler (OH). Donations in his memory can be sent to NICHES Endowment Foundation, NICHES Land Trust, the Sycamore Audubon Society or to a charity of your choice. Private family services will be held. Share memories and condolences online at www.simplicity-funeralcare.com

Published by Journal & Courier from Sep. 28 to Sep. 29, 2020.
To plant trees in memory, please visit our Sympathy Store.
MEMORIAL EVENTS
To offer your sympathy during this difficult time, you can now have memorial trees planted in a National Forest in memory of your loved one.
Funeral services provided by:
Simplicity Funeral Care
MAKE A DONATION
Please consider a donation as requested by the family.
MEMORIES & CONDOLENCES
Sponsored by Simplicity Funeral Care.
1 Entry
Yes, at bridge tables in student unions during the 1960s was a good place to meet ladies. It is to bad this is no longer the case as the bridge players have disappeared. Susan, stop by my office sometime and I can show you a picture (on my computer) of a pink and white cardinal that one of my clients has visiting his feeders. Susan, you have my condolences. ORV LINDELL
ORVIN LINDELL
Friend
October 1, 2020
Showing 1 - 1 of 1 results