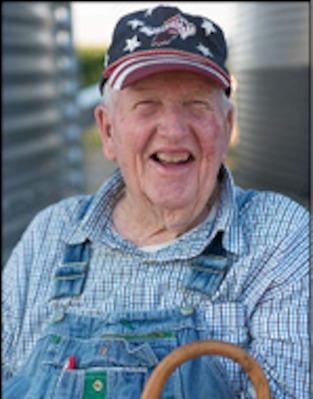 Brook - Roy A. Cooper, 90, of Brook, passed peacefully early on Friday morning November 27, 2020 following a good Thanksgiving at home with his loving wife Avalynne and his thankful family. Married nearly 64 years, Roy and Avalynne's entire married life has been spent on the Cooper family farm working together, raising their family, and enjoying their active membership in the community life of Foresman and Brook.

Born on May 3, 1930, Roy was the fourth of 5 brothers, along with three sisters born to Wilbert and Esther Cooper on their farm southeast of Brook. Growing up on the family farm, Roy developed a strong love for the land, enjoying fishing, hunting pheasants, and trapping muskrats, raccoons, and the occasional skunk with his brother Richard. He also enjoyed playing ball, horseshoes, and a little euchre with his siblings and other neighbors. Roy attended the old Foresman school before moving on to Brook for High School; a proud member of the class of 1948. After graduation, it was off to Ball State Teacher's College, hitchhiking between Brook and Muncie for two years, where he earned his elementary teaching certificate. In 1950 Roy began his only stint away from Brook, teaching school in the little town of Assyria up in Michigan. Roy enjoyed his time there, making lifelong friends, but returned home every summer to help with the farming and after two years, returned for good, telling his Mom and Dad that he wanted to return to his first love.

Farming was not an easy way to make a living, even back in the "good ol' days" of the 1950's and Roy's parents tried to convince him not to return to the farm but to continue to pursue the more stable income of a career in teaching. Fortunately, Roy had inherited a little bit of a stubborn streak and refused to give up on his dreams. Although he spent several years as a part time substitute teacher in Brook, Goodland, Kentland, and other area schools, "Mr. Cooper" spent the majority of his time helping his Dad with, and eventually taking over, the daily running of the farm.

When he wasn't farming, Roy became an active member of the Newton County Rural Youth, particularly enjoying the fun and fellowship of their popular weekend square dances. In 1956, Roy was spotted at one of these dances, by a newly arrived young medical clerk from Kentland named Avalynne. She told another young dancer that she would like to meet "that guy." The other young lady, was Roy's younger sister, Joyce, who gladly obliged and on January 20, 1957, serenaded by Roy's older brother Bob, they vowed to love each other "Forever and Ever."

As Roy and Avalynne began their new life together farming and raising their family, they decided to add an additional income source, acquiring a small herd of Holstein dairy cows. Roy milked cows for 35 years, becoming one of the last remaining family dairy farmers in Newton County until the cows finally went home in 1992. Over the next few years, he began to pass the baton of running the family farm on to his younger son Gary, his wife Karen, and their growing family.

For nearly 70 years, Roy and Gary have kept the Cooper farms going and growing. Coming back to "the farm" to visit Mom & Dad/Grandpa and Grandma/Uncle Roy and Aunt Avalynne has been a treasured tradition for the entire Cooper family. His son Bill, along with his wife Debra and family always look forward to returning home for countless family and holiday gatherings. Together with brothers and sisters, aunts and uncles, nieces and nephews, cousins, grandchildren and great grandchildren they have built lasting memories of helping out Roy and Avalynne with the chores on the farm, feeding the cows, calves, and kittens, baling hay, and occasionally checking to see if the electric fence was working.

Being a "retired" farmer, Roy of course, never stopped working, helping out wherever needed, continuing to drive his beloved old Farmall "M" tractor and going with Avalynne on "parts runs" for Gary's equipment, well into his 80's. He served as a member of the Newton County REMC and Farm Bureau boards for over 40 years, and was the Superintendent of the Ag Products Exhibit hall at the Newton County Punkin' Vine Fair for nearly 15 years. He and Avalynne were also active in their church and faith lives for many years. Roy served as Sunday School Superintendent for many years at Foresman Methodist church, and later, as a co-leader with Avalynne, of the Brook United Methodist Church Youth Group for several years. As participants in the locally popular sport of Church League dartball, Roy and Avalynne established an almost unbelievable record for longevity. When Roy finally stopped playing dartball in 2018, he had played for church teams from Foresman and Brook for 62 years!

Roy's most cherished legacy is his family. He and Avalynne are the proud parents of two sons, Bill, (Debra) of Louisville, Kentucky and Gary, (Karen) of Brook. They have 12 grandchildren and 9 Great Grandchildren

Autumn (Nathan) Stratton, Grady, Kaylie and Audrey of Buffalo, IN

Meagan Cooper of Brook, IN

Erin (Brandon) Denton of Rensselaer, IN

Heather (Gregory) Robinson, Maci and Trey of Morocco, IN

Laura Cooper of Brook, IN

Kara Cooper of Brook IN

Leah Cooper of Brook, IN

Analise Cooper of Brook, IN

He is survived by his wife Avalynne, 2 sisters Kay Torres and Joyce, (James) Sharp, sons Bill, (Debra) and Gary, (Karen) as well as 12 grandchildren and 9 Great Grandchildren