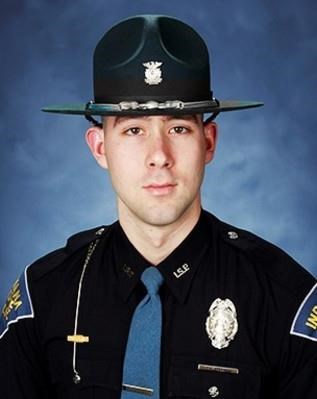 Lafayette - Trooper Peter "Bo" Stephan, 27, Lafayette, passed away Friday night, October 11, 2019, from injuries sustained in an automobile accident while on duty. He was born April 1, 1992, in Oregon, to Peter D. and Karen (Hogston) Stephan. On December 31, 2016, he married Jessica Harper, in Kokomo, and she survives.

Bo graduated from Indiana Wesleyan University in April of 2015, with a bachelor's degree in criminal justice. He began his career with the Indiana State Police on June 28, 2015 and graduated from the academy on November 19, 2015. Bo spent his hours off duty playing video games with his co-workers. Bo most enjoyed spending time at home with his wife and daughter. He was a member of Crossroads Community Church in Kokomo.

He was preceded in death by his paternal grandparents.

Funeral services will be held at 11 a.m. on Friday, October 18, 2019, at Crossroads Community Church, 4254 S. 00 EW, Kokomo, with Pastor Chris Duncan officiating. Burial will follow in the Russiaville Cemetery. Friends are invited to visit with the family from 2 to 8 p.m. on Thursday at the church. Memorial contributions may be made to the Indiana Fallen Heroes Foundation/Peter Stephan and at any Old National Bank branch. Messages of condolence may be expressed online at www.stoutandson.com. Stout & Son Funeral Home, Russiaville, has been entrusted with arrangements.


Published by Journal & Courier from Oct. 14 to Oct. 15, 2019.
To plant trees in memory, please visit our Sympathy Store.
MEMORIAL EVENTS
Oct
17
Visitation
2:00p.m. - 8:00p.m.
Crossroads Community Church
4254 S. 00 EW, Kokomo, IN
Oct
18
Funeral service
11:00a.m.
Crossroads Community Church
4254 S. 00 EW, Kokomo, IN
Funeral services provided by:
Stout & Son - Russiaville Chapel
MAKE A DONATION
MEMORIES & CONDOLENCES
Sponsored by Stout & Son - Russiaville Chapel.
2 Entries
Thank You for serving and protecting May you Rest in Peace Bless your family heaven now has another Angel watching over all of us
Laurie
October 16, 2019
Thank you Trooper Stephan for your unselfish service to keep others safe. God bless you and your family. My heart breaks at your passing.
Gail Jackson
October 15, 2019
Showing 1 - 2 of 2 results