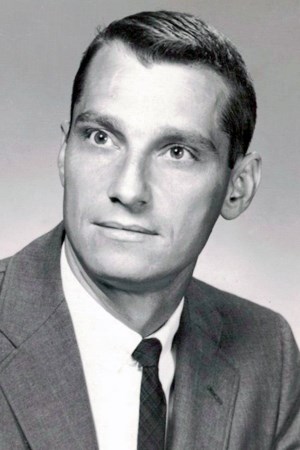 A Celebration of Life will be held at 2:00 p.m. Saturday, October 2, 2021, at Mitchell-Jerdan Funeral Home, located at 1200 Wabash Avenue, Mattoon, IL; Reverend Todd Krost will officiate. A committal service will take place in Dodge Grove Cemetery. Military Rites will be conducted by Mattoon VFW Post 4325. The visitation will be held the same day from noon until the time of service at the funeral home.

Donald was born on May 31, 1933, in Marion, IL to the late Hillary and Freda (Mansell) Perry. He married the love of his life, Jane L. Johnston on May 28, 1960, in Mount Vernon, IA. He is survived by his wife of over sixty-years, Jane L. Perry of Mattoon, IL; his son, Douglas D. Perry and wife Sarah of Bloomington, MN; three grandchildren: Gustavo, Julian, and Laila Perry, all of Bloomington, MN; and one sister, Nancy P. Emshousen and her husband Fred of Rotunda West, FL. He is preceded in death by his daughter, Julie L. Perry; and brother, Bill L. Perry.

Donald was proud of his education and continuously sought more and more knowledge throughout his life. He graduated from Roxana Community Highschool in 1951 and received a bachelor's degree in Engineering from University of Illinois in Champaign, IL in 1956. With his passion for learning, he shared his wealth of experience with others as an instructor at Lakeland College in Mattoon, IL from 1972 until 1997, where he taught civil technology and electronics engineering technology. In 1976, he achieved a Master of Science in Education from Eastern Illinois University in Charleston, IL and later received a Professional Engineer license from the State of Illinois in 1982.

In 1956, Donald honorably served our country in the United States Navy, actively serving for two years, achieving rank of Lieutenant (junior grade). From 1957 until 1972, he operated as an electrical engineer in research and development department for Hurletron Inc. in Danville, IL.

Donald was a member of the First United Methodist Church in Mattoon, IL, Mattoon American Legion, and former member of Kaskaskia Yacht Club in Shelbyville, IL. He enjoyed sailing, playing tennis, and was an avid vegetable gardener. With immense skills, Donald built their first family home that he shared with his wife and children and continued to work on numerous renovation projects during the years.

After his retirement, Donald and Jane wintered at their home in San Carlos, Mexico. They savored the timeless memories made watching the ocean, fishing, and hunting. He treasured his family but especially his grandchildren. He will be missed greatly.

Please visit www.mitchelljerdan.com or www.facebook.com//mitchelljerdanfuneralhome to light a virtual candle in his honor or share a memory with the family.

Published by Journal Gazette & Times-Courier on Sep. 24, 2021.
To plant trees in memory, please visit the Sympathy Store.
MEMORIAL EVENTS
Oct
2
Visitation
12:00p.m. - 2:00p.m.
Mitchell-Jerdan Funeral Home Ltd.
1200 Wabash Ave, Mattoon, IL
Oct
2
Celebration of Life
2:00p.m.
Mitchell-Jerdan Funeral Home Ltd.
1200 Wabash Ave, Mattoon, IL
Funeral services provided by:
Mitchell-Jerdan Funeral Home Ltd.
MAKE A DONATION
MEMORIES & CONDOLENCES
Sponsored by Mitchell-Jerdan Funeral Home Ltd..
2 Entries
I offer my condolences for Don's passing. Don was my instructor at Lakeland College, 1976 to 1980. I still talk about Don's encouragement he offered to me and his way of getting to the root of a problem with physics, math, thermal dynamics, and electrical knowledge! I am thankful that he asked me to work for him in the Spring of '80 helping fix a few houses. I cannot pass a plumbing isle at a hardware store without thinking of Don. May the Lord be with you in your loss.
Bruce Binion
October 3, 2021
Don was such a good, genuine friend and always had an uplifting smile when he walked into the room. Love to Jane, Doug, and family.
Carla Beck
October 1, 2021
Showing 1 - 2 of 2 results