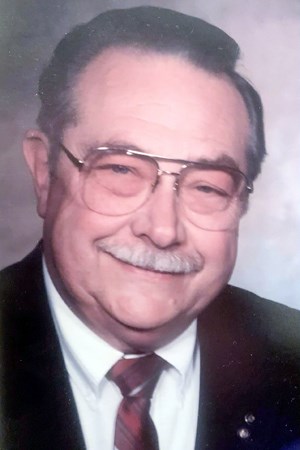 A memorial service will be held in his honor on Saturday, December 11, 2021, at 11:00 a.m. at the Immanuel Lutheran Church, 902 Cleveland Ave., Charleston, IL, with Pastor Hoover officiating.

Ken (Huck) was a proud U.S. Veteran of the U.S. Navy and served honorably during the Korean War and traveled to over 45 different countries. He also served in the Color Guard for international royal dignitaries.

Ken was a graduate of Eastern Illinois University, where he obtained a Master's Degree of Science and Education. He went on to teach academics and coach multiple sports at Charleston, Effingham, Bethany, and Warren, Illinois. Coaching athletes and mentoring students was his joy and passion. He was affectionately known as "Coach." During his coaching career he coached alongside nine Illinois High School Hall of Fame coaches.

Ken and his wife Peggy opened the Huckstep Insurance Agency in Charleston, IL, where it was a successful business for 40 years.

Ken was a long-standing member of the Charleston Rotary and served as President during his service.

Ken was a long-time member and elder at the Immanuel Lutheran Church in Charleston, IL.

He really enjoyed his community and supporting local causes, and he never knew a stranger. He truly enjoyed life and spending time with his family and friends. He will be deeply missed.

Memorials may be made to the St. Jude Children's Research Hospital or Wounded Warrior Project.

Online messages of sympathy may be left at www.krabelfuneralhome.com.

Published by Journal Gazette & Times-Courier on Nov. 26, 2021.
To plant trees in memory, please visit the Sympathy Store.
MEMORIAL EVENTS
Dec
11
Memorial service
11:00a.m.
Immanuel Lutheran Church
902 Cleveland Ave, Charleston, IL
MAKE A DONATION
Please consider a donation as requested by the family.
MEMORIES & CONDOLENCES
2 Entries
Our condolences. Ken was one of our long time customers. We will miss him & his endless stories! He would come in the office & always share his words of wisdom with us. We thought the world of him. Praying for his family & friends. All of us at C.R. Neff's~
CR Neff Plumbing, Heating & A/C, LLC
Work
December 8, 2021
I have donated to the wounded warriors, in honor of Ken. RIP my friend. I miss you
Cheryl Fosbender
Family
December 2, 2021
Showing 1 - 2 of 2 results