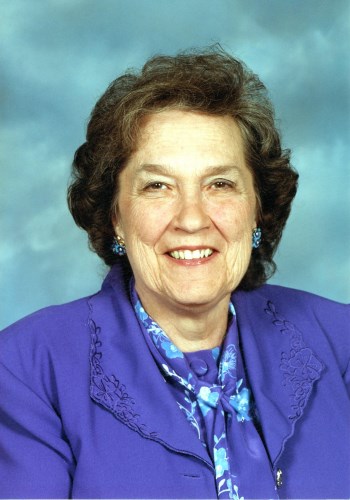 Averil I. Savery, of Lincoln, passed away on January 11, 2020 at the age of 89. Averil was born March 8, 1931 in Holdrege during a Spring Snowstorm. Her parents, Arvine and Marie (Heliker) Bierman operated Bierman's, Inc. in Holdrege, offering auto repair and related services. Averil's dad, a pioneer pilot, introduced aerial crop dusting to Phelps County. Averil often flew with her father and sometimes took the controls, but never became a licensed pilot. She graduated from Holdrege High School in 1949, played first violin in the school orchestra, earned National Honor Society status and turned down a scholarship to Hastings College. She wanted to teach Home Economics, a major not offered by Hastings. She earned her baccalaureate degree at the University of Nebraska, class of 1953. She was a member of the NU Pep Club, the Tassels, and sang in The Messiah at the NU Coliseum.

While at college, she met Gordon Henry Busboom of Crete and on June 21, 1953 they married at the Presbyterian Church in Holdrege. In the fall of 1953, Averil (Home Economics) and Gordon (Vocational Agriculture) both taught high school in Callaway, NE. In the summer of 1955, they moved to Beatrice where Gordon taught at the high school and Averil prepared for the birth of their first child, Katherine Marie born in May, 1956. Their second child, Steven Alan, was born in February, 1958. When Gordon became the Executive Secretary of the Nebraska Cooperative Council in the fall of 1959, they moved to Lincoln and bought a home at 17th and Woodsview. Their third baby, Mary Elizabeth, had the audacity to be born in the early morning of Christmas Day, 1959. Averil wanted to go home later that afternoon to celebrate Christmas with Kathy, Steve and the many guests gathered at her house for the holiday! The doctor didn't like the idea and consequently Averil always teasingly said Mary "wrecked Christmas" that year. Many happy memories were created on Woodsview with the other young families that lived along the block.

As Gordon's eyesight began to fail due to his diabetes, Averil became very familiar with highways of Nebraska as she drove him to meetings at the various Co-ops throughout the State. The young family joined Southminster Evangelical United Brethren Church in 1959. Averil chaired many committees: Finance, Evangelism, Kitchen Remodeling, Landscape, Memorials, Member Care and Courtesy. She was a longtime member of United Methodist Women and the Administrative Council. She planned many receptions, funeral lunches, Carol Sings and Breakfasts in the Park. She also taught Sunday School and was Church Treasurer more than 35 years. Averil loved Southminster and considered its members her second family.

Gordon died November 27, 1971 after a lengthy battle with kidney failure due to diabetes. While at Southminster the Busboom and the Savery families were friends. After illness claimed the lives of their first spouses, Averil and Gil Savery were married on January 6, 1973. They enjoyed their merged family and the many grandchildren and great-grandchildren that came along. They especially treasured their beloved Maltipoo Friskie. Averil and Gil were married 45 years before Gil's death on November 2, 2018.

Besides her many church activities, for more than 40 years Averil delivered Meals on Wheels, the majority of time with dear friend Carol Dorman. She also sold Avon for several years. Averil loved to cook, garden, read, sew, knit, crochet and watch Husker sports – especially football. While life dealt her some difficult situations, she lived her faith and was an inspiration to many.

The family would like to thank the staff of Southlake Village for their love and care of Mom for the past two years.

A small family private memorial service will be held at Roper and Sons on Friday, January 15, 2021 at 11 am. Due to COVID restrictions the family invites you to join them via Livestream at roperandsons.com. Visitation from 2-4 p.m. at Roper and Sons, 4300 O St., on Thursday, January 14. Memorials may be made to the Food Bank of Lincoln or Tabitha Meals on Wheels program.

To plant trees in memory, please visit our Sympathy Store.
Published by Lincoln Journal Star on Jan. 13, 2021.
MEMORIAL EVENTS
Jan
14
Visitation
2:00p.m. - 4:00p.m.
Roper and Sons
4300 O Street, Lincoln, NE 68510
Jan
15
Memorial service
11:00a.m.
Roper and Sons
4300 O Street, Lincoln, NE 68510
Funeral services provided by:
Roper and Sons
GUEST BOOK
5 Entries
Dear Pam and family, Though we didn't know your stepmom, her story tells us she was a wonderful lady and had an impact on many people in her lifetime. Our prayers for you and your family as you mourn as well as celebrate a life well lived. Take care and God bless.
Sheila and Harry Kellenbarger
January 15, 2021
I´m sorry for your loss. My prayers are with your family m.
Joyce Ann (Weber) Dingledine
January 14, 2021
Condolences to Pam Savery.
Zoya Zeman
January 13, 2021
To Averil's family-- I am so sorry to hear of your mother and grandmother's passing. Knowing she was a believer...I know Heaven just became a little bit more beautiful, though. <3. I got to spend some precious time talking and laughing with her that I will forever treasure. She was so funny, and knew how to make me totally crack up. I also cherish the words of advice she would give me when I asked for it. She was a gift to many, myself included. Rest In Peace dear lady. The world is a better place because of the many years you were in it.
Wendi Mandl
January 13, 2021
My sympathies to the family of Averil. I am reminded of the wonderful life she and Gil had. Two delightful, kind and loving people .
Jane Ford Witthoff
January 13, 2021