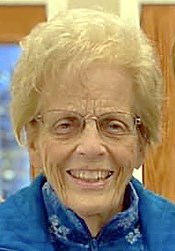 Carol was born to Frederic & Helen (McLeran) Colby in Lincoln, NE on April 17, 1936. Carol graduated from Lincoln High School class of 1954. She attended the University of Nebraska - Lincoln and was a member of the Delta, Delta, Delta Sorority. Carol worked in the office at Farmers Mutual Insurance Co. for a period of time in her early years.

Carol met Harold Jones cruising O Street in Lincoln and they married on July 14, 1957. Harold was drafted into the army in 1958 and was stationed in Connecticut where they lived for two years before returning to Nebraska, making Crete their home. Carol and Harold were blessed with four children: Terri, Kevin, Jeff and Stacey. Carol was a devoted mother and homemaker and spent her years raising their family.

Carol was a member of the United Church of Christ in Crete and did volunteer work which included delivering Meals on Wheels. She enjoyed sewing, gardening and always had a love for cats, starting with her first cat Frisky. Carol could always be found working out in the yard on their acreage maintaining beautiful flower beds with cats and kittens a constant part of the mix.

Several plants filled the dining room & kitchen tables during the winter months. She often talked about Mother Nature and doing her part to take care of nature's gifts. Carol loved being outside and was very knowledgeable about plants, flowers, trees and weather. Carol had a gift with words and could describe events with vivid details including colors, emotions and feelings helping the listener to feel that they had experienced the same event. After a brief illness, Carol died on August 27, 2021 having reached the age of 85 years.

In lieu of flowers, memorials may be given to the Capital Humane Society of Lincoln, NE. Graveside burial service will be at 2 p.m. Friday, 9/10, Lincoln Memorial Cemetery in Lincoln, NE. Masks are required. Please visit www.kunclfh.com