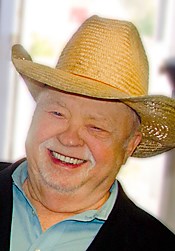 Larry Lee Gottula transitioned from this mortal coil on March 29, 2021, at approximately 7:15 a.m. His passing set him free from the shackles of illness and the fragility of age and allowed him to enter the kingdom of heaven. While there's little doubt God had a few questions for him, those who love him are confident that his answers were concise, truthful and punctuated with jokes-some no doubt a bit off color.

Born on October 31, 1937, Larry was the first child and eldest son of Elmo Fred and Reva Minnie (nee Sanford) Gottula. His family moved to Lincoln, Nebraska, not long after his Halloween birth. At age 4, Larry entered the first grade. It is not clear if his early entry into school reflected an advanced intellect or that he was simply annoying his mother.

After attending Trinity Lutheran School, Larry went to Lincoln High School where he played tennis, making the varsity team. He graduated in 1953 at age 16 with a class that featured talk show host Dick Cavett and actress Sandy Dennis.

Larry was enterprising from a young age, starting with his paper route for the Lincoln Star. He always had an after-school job, and after graduating high school, he worked at Schriers Grocery. Even though his boss was impressed enough with his work ethic that he gave Larry a nickel raise, Larry determined that he didn't want to and wouldn't work in the grocery business as a career.

At 18, he enrolled in the University of Nebraska, majoring in math and business administration. With one year of college under his belt, he enlisted in the U.S. Air Force. After completing basic training at McConnell Air Force Base in Wichita, Kansas, he was stationed in Alabama. After two years, he transferred to the Air Force Reserve and returned to the University and his job at the grocery store.

While studying at a friend's house in Lincoln, he met a young woman from Iowa named Ginger Bassett. The electric connection between the telephone operator and the student who brought a bottle of gin to the study session started with some verbal sparring and ended in a date. Larry and Ginger married October 5, 1959, and they welcomed their first daughter in August 1960.

As the family grew with the addition of a son, Larry continued to go to school and work at Hinky Dinky in Lincoln. After being offered a promotion, he opted not to finish his degree and went to work full-time. At Hinky Dinky, he was promoted from supervisor to buyer and was on the management track when he was recruited to run a Gibsons Discount Center in Beatrice, Nebraska. He was tapped for his ability to help the company incorporate a grocery section into the general merchandise franchise. From there he went to work for Allied Foods in Des Moines and then A&P in Lincoln, Nebraska.

By this time, the guy who didn't want to work in groceries had spent the better part of his youth and adulthood in the business, working and managing stores in Iowa and Nebraska. With structural and management changes afoot at A&P, Larry decided he would do something else-something that didn't involve groceries.

Then came the call from Frank Lint, a homebuilder and developer in Ankeny. Lint owned Frontier Supermarket and the enterprise was bleeding money. He needed someone with supermarket experience to come in and turn it around. The pay was paltry, but the position came with a four-bedroom house and a car. The house appealed to Ginger who was pregnant with their fifth child, but most important to Larry was that Lint offered him the opportunity to be an owner, igniting an entrepreneurial spark that continued to flame and flare for the next five decades.

Under Larry's management, Frontier not only turned a profit but expanded and by 1975 had three locations. Larry bought the company and remained close friends with Lint until he died in 1991. As the 70s gave way to the 80s, Larry no longer looked at leaving the grocery business, he wanted to change it. He and long-time friend Fred Wickman started Food-4-less. He called Sampson for assistance with the logo and an introduction to Willie Glanton, an attorney with U.S. Small Business Administration in Des Moines.

The first Food-4-Less store opened on Southeast 14th Street in Des Moines. This no-frills approach retained Larry's penchant for offering quality meat, but people bagged or boxed their own groceries in a store that resembled a warehouse. One store turned into nine across Iowa from Sioux City to Davenport. By 1980, Food-4-Less boasted the largest individual supermarket in the state.

The company and its growth trajectory caught the eye of the Erickson family (Holiday Gas) in the Twin Cities. They bought out the partners and for the first time three decades, Larry was officially out of the grocery business, except for a 1990 consultation in Budapest with the Hungarian deputy minister of agriculture. (Yes, it's a great story.)

Larry retired in late 1985 for approximately a year before Ginger told him he needed go back to work… or else. He invested in real estate, opened an ice cream store and produced a record album before returning to what he knew best: retail.

In 1992, he met up with Dave Briddle, a former employee and manager from Food-4-Less. They were scouting sites for a swap meet in Kansas City and stopped for lunch. As they waited for their food, they spied a sign that said, "Antiques & Furniture." After counting cars and watching the store's foot traffic, they went in and talked to the manager about the business. And the Brass Armadillo Antique Mall was born with the first location situated two doors down from the first Food-4-Less more than 10 years earlier.

Together they opened seven Brass Armadillos, refining the business strategy to encompass locations with proximity to major interstates, a standardized look and promotions and advertising designed to build traffic. The first branded prototype Brass Armadillo opened in Omaha on I-80 near Sapp Brothers.

No matter what he was doing, Larry enjoyed life. Though he lived in Verdi, Nevada, for 14 years, he never stopped being a Midwesterner with deep roots in Iowa and Nebraska. When he moved back to Iowa in 2017, friends and family celebrated his 80th Birthday with a bash that included music by the Nadas.

Over the past four years Larry battled heart and kidney issues. In November, he went into home hospice, primarily cared for by his children, Steve and Johna. He rallied multiple times over the next five months and those moments couldn't be more precious. He passed away at Taylor House on Monday, March 29. His family thanks Unity Point Hospice-especially nurse Kim and his aide Garland for their tender care.

A celebration of life will be held on Saturday, May 1. In lieu of flowers, memorials may be directed to the family in Larry's name for support of his favorite charities and causes. Online at www.MemorialServicesOfIowa.com

To plant trees in memory, please visit our Sympathy Store.
Published by Lincoln Journal Star on Apr. 11, 2021.
MEMORIAL EVENTS
May
1
Celebration of Life
Funeral services provided by:
Memorial Services of Iowa
GUEST BOOK
Sponsored by Memorial Services of Iowa.
2 Entries
As a former Trinity Lutheran School attendee like Larry, I was happy to know him for many years. My deep sympathy to his family. Please note that this guy could never be held back to do what God had intended him to do.
Marjorie Schwabauer
April 11, 2021
My sincere condolences to the entire Gottula family. Larry and I were teammates on the Roberts Dairy Pop Warner football team as kids. I still have our team photo boxed somewhere. While in high school he was employed part time at my parents business Lincoln News Agency.
Ken Pocras
April 11, 2021